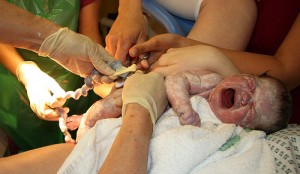 Lately, I’ve had a slew of new parents (or proud aunts and uncles) sending me photos of newborn babies. And while some of the pics are aww-inducing, some of the images are…

…downright frightening. Seriously, some have made me recoil in disgust.

Now, before you think I’m a heartless baby-hater, know this. I love kids. I’ve been a camp counselor and a preschool teacher. I also was an editor for Parenting and Babytalk magazines as well as the pregnancy and parenting website, WhatToExpect.com. And I’ve been known to squeal at certain adorable baby-based YouTube videos.

It’s just that most newborns aren’t cute. Some are still covered in goo (wipe that up before the flash goes off, whydontcha?). Some have misshapen heads (hey, they did just come through a fairly narrow pathway). Some are strangely colored (one I saw was practically purple; another had a pink face and a yellow nose). Some are making creepy facial expressions (made even creepier by the fact that they have yet to open their eyes).

Of course, these fresh-out-of-the-womb babies turn into impossibly adorable infants later on whose photos reduce me to mush and compel me to speak in high-pitched, monosyllabic words. When my one-day baby reaches that state, you better believe there will be whole albums intended for mass consumption publicly available on the Interwebs. Until that point, only one or two dimly lit will be shared with anyone.

And with that, I vow to hold off on sending printed baby announcements until my child is ready for his/her close-up. Sweetie, you’ll thank me later.

‘Fess up: Has a friend’s photos of her baby triggered reverse peristalsis (even just a little)? Or do you really think all babies, goo-covered and otherwise, are super-cute?