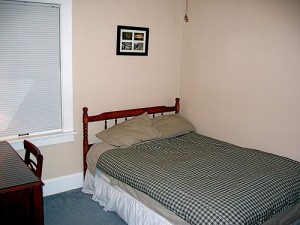 Given that my parents and my husband’s parents live five minutes away from each other–and we live an hour away from either set–we usually wind up spending the night in our hometown of Staten Island, NY, once or twice a year. This Christmas Eve/Hanukkah, we found ourselves on a full-size air mattress in my childhood bedroom.

Despite the childish glow-in-the-dark stars and butterfly stickers that grace the walls of said bedroom, Paul awoke on December 25th with a very adult Christmas wish. That room may have been the preferred backdrop for our high school hanky pankies (yes, I’ve pluralized it), but I couldn’t justify fooling around in there as a 29-year-old who sleeps in her own home with her husband 350ish nights of every year. The raging hormones of years past clouded the fact that my parents were downstairs and my little sister was upstairs. As a 29-year-old, my nearby neighbors were at the forefront of my mind when my husband came knockin’.

It wasn’t the first time we were in this predicament. We’ve stayed in friends’ and relatives’ guest rooms about a dozen times. Blame it on the unfamiliar settings, but we’ve been tempted to go to town on each other in other people’s homes. I’m proud to say we’ve never given in. We don’t yet have a guest room of our own, but our futon/couch has served as the sleeping place for many coupled-off friends. I’d like to think they’ve kept their bodily fluids to themselves when they’ve stayed over. But if they haven’t, I’m none the wiser.

Have you ever fooled around in a friend or relative’s house (you know, now that you’re a grown-up)? Would it bug you if you found out your overnight guests got frisky?