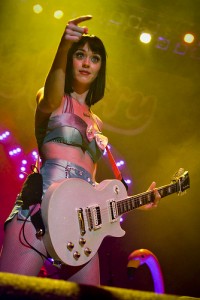 With rumors floating about that Katy Perry and Russell Brand are headed to divorce court (or rather, a luxurious law office with a fancy mediator presiding over a granite tabletop), it got me thinking about marriage laws I’d like to see passed. If gay marriage is still unlawful in most states, then these forms of matrimony should be too.

The Quickie Courtship
Sure, I knew very quickly that Paul was the guy I wanted to marry. That doesn’t mean we should’ve become engaged the moment I decided he was the one. Besides the fact that we were only 13, we also didn’t know each other all that well yet. And it takes a good year/year-and-a-half to observe all the quirks, hear all the potentially deal-breaking stories, and get a sense of what spending the rest of your life with that person would be like before you really know you want to commit eternally. If Wikipedia is to be trusted, Katy and Russell were engaged three months after they became a couple and married ten months after that. I know a year is a lifetime for celebrities, but it’s often (though not always) not enough time to build a foundation for a happy, long-lasting marriage. So if gay marriage could be done away with in the states, why not require couples to spend a substantial amount of time together before applying for a marriage license?

The Third-Time’s-a-Charm Couple
Everyone makes mistakes. And (mostly) everyone deserves a second chance. So if the first marriage didn’t take, I would hope that a repeat bride or groom would think long and hard about taking nuptial vows again. But if that second marriage fails, I don’t think that person should be able to obtain a marriage license so easily for yet another remarriage. Crazy? Maybe, but you have to admit it makes a lot more sense than forbidding two consenting, loving adults who happen to have the same body parts from marrying. So how should getting married be harder for the threepeaters? I haven’t figured it out yet, but maybe those groups who are so dedicated to preserving the sanctity of marriage should put money toward enrolling potential re-marrieds in pre-marital counseling.

The Cheaters
Infidelity should be illegal. If you’re not allowed to be married to two people, why is the government cool with you being unfaithful to your one spouse? I know not everyone has complete control over who they fall in love with, whether or not they’ve had a wedding. But why not go ahead and end your marriage like a grown-up before you start sneaking around to do the nasty? And if you do it on the down-low and get caught, perhaps you should pay a fine or be sentenced to community service.

All right, so I’m not totally serious about these, but if they seem absurd to you, prohibiting gay marriage should seem a lot more outlandish.

Could you get behind any of these proposed laws? What other marriage laws would you like to see enacted?