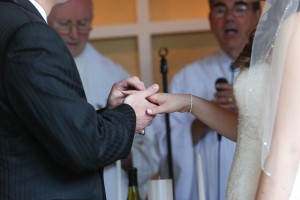 Paul was raised Catholic and, while I’ve been inside a synagogue only a few more times than I’ve been inside a church, I was raised Jewish. Paul and I have always been okay with that. Some people around us, though, are confused by it. Here are some wacky things they’ve said to me upon learning that Paul and I don’t share a religion–and why you should think twice before you utter these to your intermarrying friends.

“Have you talked about how you’ll raise your kids?”
Besides the fact that this is very personal (along the lines of “How will you explain to your kids where babies come from?”), it’s insulting to ask someone who’s been with her partner for any substantial amount of time. I’ve been tempted to say, “No, the topic hasn’t come up in the 16 years we’ve been together, ” but if I’m not that close with the person who’s asking, I simply say, “Yup, we’re all set.” And if a good friend asks, I’ll explain how we’re handling it (read on for that answer, because I consider you all to be good friends).

“So who’s converting?”
Uh, neither of us. This one stings because it implies you have to feel exactly the same way about religion in order to have a happy marriage. That’s not at all the case. It’s way more important that you have similar morals and values–Paul and I firmly believe that doing bad things to others is bad, so it’s cool if one of us is a bigger Jesus fan.

“It’s confusing to raise children with two religions.”
One day, I’m going to respond with, “Don’t worry; our kids will be smart enough to figure it out.” For now, though, I smile and nod because people like this usually can’t be reasoned with. The first time someone said this to me, it hurt because I was 18 years old and unsure how we would one day deal with this (because, like I said, I was 18 years old). This particular woman married someone of another faith and decided to raise her children with her religion exclusively. But guess what–her kids have had issues with drugs, eating disorders, and the like. To me, that’s proof that there are far more confusing things in life than celebrating two sets of holidays (which is likely what our future little ones will be doing).

“How do your families feel about it?”
If you ask me this, I infer that you either 1. think our families have a problem with it or 2. have a problem with interfaith marriage, yourself. Neither makes me feel like talking to you. To be honest (as I always am with you, my fabulous readers), would my parents have preferred I marry Jewish? Sure. Are they 100,000% thrilled that I wound up with the wonderful human being known as Paul? You better believe it. Had they given me a problem with marrying an Italian Catholic, I had the perfect comeback planned: “Perhaps you shouldn’t have raised me in Staten Island.”

“Was it weird at your wedding ceremony?”
Yeah, it’s SO weird when a bride and a groom who are madly in love profess their devotion in the presence of a rabbi AND a priest. CRAZY! Watch out world, I think the end is near. In all seriousness, it wasn’t weird at all. We intentionally chose a priest and a rabbi with a history of performing wedding ceremonies jointly (that’s them behind me and Paul in the photo up there), and they seamlessly worked together to pronounce us man and wife. It was a beautiful way to unite us, our families, and our friends.

“Do you wish you married Jewish?”
If I answer yes, then I’m admitting I settled for Paul, which I did not. He was my number-one choice for a husband since I was 13. I joke with him that I wish he were Jewish (mainly because he looks hot in a yarmulke), but if he were, he wouldn’t be exactly who he is, and I love him exactly the way he is (well, maybe minus the video game habit). So why would I change that?

And while we’re on the subject, don’t say these 6 things to childhood sweethearts.