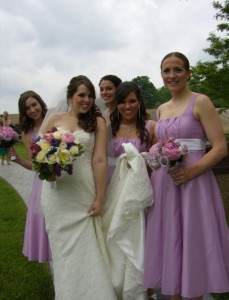 There’s (almost) always one: an uninterested and/or disgruntled bridesmaid who had no business being chosen for the wedding party in the first place. Why does this happen so frequently? Brides often forget to consider these qualities before issuing that all-important invitation to be a bridesmaid (luckily for me, the four lovely ladies in that picture were the best bridesmaids around–they even wore lavender taffeta!). Check out this checklist.

She’s absolutely thrilled to learn you got engaged.
If your pal is the type to jump up and down and scream when she gets excited, she’ll jump up and down and scream when you share your engagement news if she’s bridesmaid-worthy. If she’s not that type, she’ll give you the heartiest, sincerest congratulations you’ve ever heard her offer when you make your announcement. Of course, few people will be as thrilled as you are that you’re getting married, but friends who don’t come close to your level of enthusiasm (whether because they’re too busy wishing it were them getting married or they just don’t care for you as much as you do for them) probably won’t do wedding-party tasks with a smile.

She’s a part of your past.
Yes, new friends can make perfectly wonderful bridesmaids. New is relative, though. A year of friendship may be plenty of time to tell that you’ll be BFFLs (that’s best friends for life, for those of you who didn’t scribble that on notebooks in the 90s). Less than that, and you probably don’t know best-buddy basics, like her middle name and the foods she’s allergic to–so she’s not on the same level as your sister or college roommate.

You suspect she’ll be a part of your future.
No one can predict what’ll happen in years to come (sorry, palm readers). But if you can’t envision yourself staying in touch with her well after your wedding, why would you want to see her face in every. single. wedding photo?

She’s seen you at your worst.
Don’t bring a friend into the bridesmaid fold who has no idea what you’re like under intense pressure and scrutiny as you may be (fingers crossed you’re not!) during your engagement and on your wedding day. She needs to know ahead of time what she’s getting herself into, so she won’t freak out or flat-out bail when things aren’t all sunshine and peonies.

You’d do anything for her (short of taking a bullet, maybe).
Some brides really expect their bridesmaids to do anything they ask of them–like holding the wedding gown away from the potty as the lady in white tinkles. Whatever you’d request as a bride, make sure you’d be willing to do the same for your bud. If you’re not, it’s not fair to put her in your wedding party.

She fully supports your marriage.
If an ounce of her is doubtful that you and your hubby are going to make it, you’ll feel that. Or if she’s not a fan of your man, you’ll feel that too. Neither makes for someone you want standing next to you when you exchange vows.

She has the time and money.
This is last because it’s the least important–yet it still warrants mentioning. Being a bridesmaid is time-consuming and expensive, and some women simply don’t have the resources. You may not mind if she does nothing more than attend your wedding. Great, ask her. If you expect her to accompany you on wedding-dress-shopping expeditions, throw you a bridal shower and bachelorette party, buy a designer bridesmaid dress, and assemble wedding favors and programs, you’ll be disappointed when she can’t. So make sure your expectations of someone who’s short on cash and free time are reasonable before bestowing upon her this honor–and responsibility.

Any you’d add to this list of must-have bridesmaid traits? Could you ask a friend to be a bridesmaid if she weren’t all that excited about your wedding?