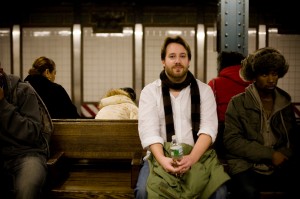 I’ve only hung out with Michael once (he’s the dude on the subway bench who doesn’t look like he’s going hiking in the Himalayas), but it was enough to learn that he’s a great guy who will constantly make the lucky gal he marries laugh. Don’t take my word for it, though. Check out the glowing review our mutual friend, Stephanie (who’s equally hilarious), gives him.

“Mike is your boyfriend and bestie rolled into one lovely, sometimes bearded face. He’ll sit through the chick flick with you but then take you for a romantic dinner like the strapping gentleman he is. Mike is creative, witty, and warm. I wholeheartedly endorse his candidacy as your suitor.”

He’ll chip in by: Working in business development (“a fancy word for sales”) for a well-known website design and advertising agency

His favorite things: Writing, “though I never make time for it any more–which I’m working on.” He also likes “reading books other people have written, watching films other people have directed, drinking, and eating fattening food.”

Vice his wife will have to tolerate: “I smoke three or four cigarettes a day. I see quitting in my future, but even 15 years from now, I can imagine us occasionally walking tipsy out of an awesome meal and me wanting to light one up.”

Motivation for marriage: “I can see plenty of reasons not to get married and live in an otherwise committed relationship. But I want kids, and I think kids deserve married parents. They also deserve puppies. So I’d probably get them those too.”

His baggage: “I once drove up to the city from my parents’ house in Jersey to make sure I’d locked an apartment door that I knew I’d probably locked. If talking guys down from anxiety ledges makes your stomach turn, we will make a horrible, horrible couple.”

The perfect wife (in 5 words or less): “Funny partner kicking ass together”

Does Michael sound like your mate? Leave a comment, and I’ll put you in touch with the man, the legend. Did you swoon when he mentioned wanting kids and puppies? Is smoking a deal-breaker?

Update! Previous Husband Material subjects, Dan and Tom, have dates with Merital Bliss readers this week! I’ll let you know how they go when I find out.