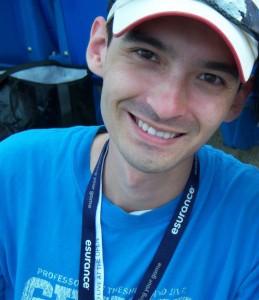 You all enjoyed meeting Dan so much that I thought it was high time to introduce you to another great single guy who’s into settling down. I’m thrilled that my pal Tom was up for participating.

Tom worked with my husband Paul, and even though Paul changed jobs, we still hang out with Tom pretty much every week. The thing I love most about Tom is that he’s up for anything–when I said I wanted to have a Disney-themed New Year’s Eve party (I may or may not have been intoxicated at the time), he showed up dressed as Lumiere, the candelabra from Beauty and the Beast. He wore a paper hat on which he drew flames and held a candlestick in each hand–so clever, especially because he was easily able to remove his costume when he saw that no one else played along. He even brought a Mickey Mouse shot glass! Point is, Tom’s a good guy with a sense of humor. Here’s what else you should know:

He’ll chip in by: Working in software product development (but he’s starting
an MBA program)

The Details
His favorite things: Traveling, sports, writing, cooking, and just
about any kind of music.

Vice his wife will have to tolerate: “I’m a crazy baseball fan, and
all summer long I’m busy being extremely passionate about
the Phillies. It’s not a hobby–it’s a way of life for me.”

Motivation for marriage: “I just want to have someone to explore the
world with–and to share special moments.” (Aw!)

His baggage: “I have a lot of friends who are girls, some of whom I’m very close to.”

The perfect wife (in 5 words or less): Honest, intelligent, adventurous, caring, and loving

Single New York girls, leave a comment if you’re interested in meeting Tom! And for those of you outside of New York, PLEASE let me know if you have any wonderful, marriage-worthy single guy friends who’d be up for being featured.

Could you date a guy who’s close friends with lots of women? Any Phillies fans out there?