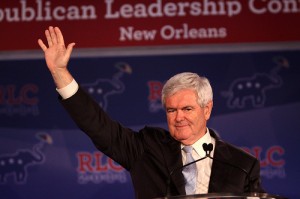 Presidential candidate Newt Gingrich speaks loudly about preserving family values. Quietly, though, he thinks his second wife should’ve “tolerated his affair” and agreed to an open marriage–or whatever one calls a marriage where the husband can have a mistress or two, according to CNN.com. This brings up the question: Is an open marriage a marriage at all?

My feeling is this: Anything that consenting adults do is just fine by me. It’s why I support gay marriage (and you should, too). In Newt’s situation, though, his wife (you know, the one he married six months after he and bride number one divorced) didn’t consent to being cheated on. Newt only brought up the idea of an open marriage after he already broke that vow about being faithful. In fact, he allegedly threatened his wife with divorce if she didn’t agree to his open-marriage proposal (what kind of ring does one buy when one proposes open-marriage, anyway?). Class act, that one.

If you don’t want to be a one-woman man (or, for that matter, a one-man woman), don’t get married. Marriage is about committing yourself to one person you love so deeply that you’d never do anything you know would hurt them. If imagining your partner in pain can’t stop you from cheating, then you definitely don’t love that person enough to be married to them.

What bugs me most of all about this is that Newt thinks marriage should be between one man and one woman, yet his ideal arrangement allows multiple women into his marital bed. How could someone so vehemently oppose gay marriage when his own lifestyle doesn’t fit the definition of marriage he supports? Newt, you might be the biggest hypocrite in this race, and that’s saying a lot because you have plenty of competition.

And now, just for fun, captions to the above photo of Newt:
Raise your hand if you enjoy cheating on your wife.
High five for infidelity.
Hey, you there, in the back–ever wanted to be part of a political sex scandal?

More About Celebrity Marriage
Mindy Kaling Isn’t Afraid to Admit She Wants to Get Married, and I Love Her for It
Why Katy Perry and Russell Brand’s Brand of Marriage Should Be Banned