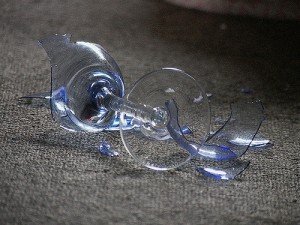 Our first casualty was probably one of our fragile Mikasa bowls, considering we’re down to six when we once had eight. But breaking bowls didn’t get me nearly as emotional as losing one particular wedding gift on New Year’s Eve.

Paul and I hosted 14 people at our apartment to ring in the New Year, and we were mostly prepared: We had the requisite hats and noisemakers, pigs in a blanket and meatballs for hors d’oeuvres, and lots and lots of alcohol. One thing we didn’t have, though, were champagne flutes for the midnight toast.

We intended to buy the classy plastic ones, but all of the nearby 99-cent stores (yes, there are multiple) were fresh out. I felt serving Veuve Clicquot and even Korbel in red Solo cups was sacrilegious, so I took out the good glassware, including our toasting flutes from our wedding. My plan: Paul and I, who weren’t quite as drunk as most of the other guests, would use these two. Instead, my well-meaning sister grabbed one for herself, which would’ve been fine, if she didn’t leave it unattended on the edge of our dining table for another guest to inadvertently back into and knock over.

When I heard the unmistakable sound of glass shattering against my hard wood floors, I thought, please don’t be a toasting flute. I didn’t realize I was attached to it until that moment. We don’t see the people who got them for us, and we almost forgot we had them until we were frantically looking for vessels for bubbly. But the idea of something from our wedding breaking into hundreds of pieces (and there were literally hundreds–the stem contained tiny bits of crystal) just didn’t sit right with me. The guest was so apologetic, and other guests were so helpful in cleaning it all up. Still, I had to take a moment to myself to mourn the loss.

Obviously, if the champagne flute smashing is the worst thing that ever happens during our marriage, we’ll be an extremely lucky couple. But you better believe I’m not taking the remaining toasting flute out of its protective foam for another party.

Are you/do you think you’ll be emotionally attached to any of your wedding gifts? Would you keep those items out of harm’s way or take them out to use on occasion?