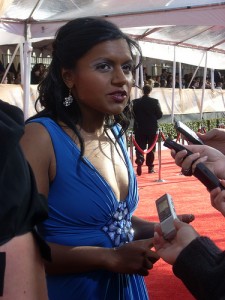 Wanting a loving, long-lasting marriage doesn’t seem to be the thing to do in Hollywood anymore (if it ever was)–unless you’re Mindy Kaling, the hilarious actress/writer from The Office and the author of the book that thoroughly entertained me during my subway rides to and from work this past week. I already adored her, but her thoughts on marriage had me cheering on the train, much to other passengers’ dismay.

You see, Mindy has happily married parents (who, as you’ll learn if you read Is Everyone Hanging Out Without Me? [And Other Concerns], enjoy gardening, milkshakes, and Ray Romano), so she had this crazy idea that she’d like to be happily married one day, too. She isn’t there yet (though I wouldn’t be surprised if her cute boyfriend popped the question soon), but she has no qualms about confessing that she wants to tie the knot.

That kind of confession shouldn’t have elicited from me the same whooping noise Arsenio Hall drew out of people in 1990–yet it’s so rare to read about a smart, talented, independent woman who wants a fairy-tale ending that I couldn’t help but celebrate.

It seems like there are two paths women can follow (which is better than the formerly singular path, but not by much): devoted wife or successful, thinking, working lady. Of course, there are plenty of women who are both. If you’re the latter, though, it’s like you’re not supposed to want to be the former also. But Mindy doesn’t care. She wants it all. And she additionally wants married people to stop grumbling about being married. “Marriage is work, but you may as well pick work that you like,” she says. I couldn’t agree more. Marriage isn’t easy, but getting to hang every day with the guy you love most in this world ain’t hard.

So, Mindy, I’m wishing you a lifetime of holding hands in the supermarket, cuddling on your couch, and watching reruns of Ray Romano’s cancelled shows. I wish Katy Perry and Russell Brand took marriage as seriously as you do!

Do you think single actresses shy away from admitting they want to get married–or are they open about it and I just didn’t get the memo? Do you think they truly don’t care if they couple off permanently?

P.S. I know there are way more flattering photos of Mindy out there, but this is one of about five I could use legally for free.