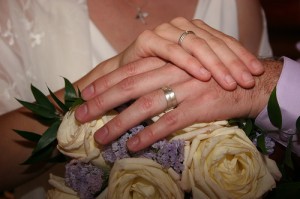 A guy I know recently admitted he has no interest in getting married–which is all well and good because it’s certainly not for everyone. But then he did a funny thing.

He criticized what I believe to be a central tenet of my and Paul’s marriage.

First, a little background on him: He has a long-term girlfriend, who supposedly shares his views on marriage. He routinely flirts with other women. He doesn’t include his relationship status in his Facebook profile, and he often changes his profile picture to be a photo of him hugging, kissing (on the cheek–and once a shoulder) or otherwise getting personal with a lady who’s not his girlfriend (occasionally, his love makes it into the main image). Once, his photo was of him with his arm around a married friend of ours. That girl’s hubby was none-too-pleased because other people mentioned they looked like a couple in the picture.

So the other day, it came up in conversation that Paul and I don’t keep secrets from each other. Ever (except when my best friend told me she was pregnant and asked me not to tell a soul).

“Why?” asked the flirty marriage-hater.

“It’s what we’ve always done, and it’s cut out a lot of jealousy and surprises,” I explained.

He then basically said we invade each other’s privacy and don’t trust each other.

In that moment, I wanted to dissect his relationship and point out the many flaws I find in it (you kiss other women’s shoulders when you have a perfectly good shoulder to kiss at home!). Instead, I walked away to cool off.

I realized: Every couple has their own reasons for doing what they do. And if it’s working for them, why dis it? I would, however, appreciate it if they afforded me that same right. They may not want to get married, but we did, we’re happy about it, and the little rules we abide by work for us. Accusing us of not trusting each other (um, we do–emphatically) and invading each other’s privacy (we don’t want to keep anything from each other!) isn’t fair since he doesn’t have the whole picture–just as I don’t of his relationship.

Do you think people who don’t want to get married should still respect marriage/married people? What relationship guidelines do you follow that others might object to?

More About Marriage
6 Things Not to Say to Married Women Who Kept Their Name
Why Get Married?
Is Open Marriage Still Marriage?