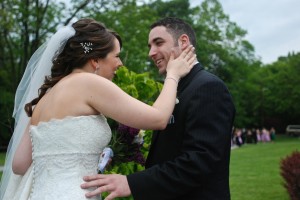 This Valentine’s Day, let’s celebrate marriage. After all, don’t we honor this St. Valentine dude for allegedly marrying people against an emperor’s wishes (or so Wikipedia tells me)? To pay homage to that, here’s why three folks with different marital statuses (stati?) want/wanted to get married. Warning: It behooves you to have tissues handy.

The Unattached Gal’s Take
“My father died just three months shy of what would have been my parents’ 25th wedding anniversary. But surprisingly, it was during the three months before his death that I learned the most about life–and more specifically, about marriage. I’d always dreamed of walking (or in my case, rolling…) down the aisle one day, and like any girl, I had this romantic, fairytale story playing out in my head. To me, love and marriage was all about those big, sweeping, swell-of-the-orchestra gestures where the lady of the hour rides off into the sunset with her prince. That’s how it had to be for me, I decided.

Until, that is, I saw my parents battle my father’s cancer. Together. My mother drove him to appointments, and they’d have long conversations during the long car rides. She never left his side during each round of chemotherapy. And they never let the other give up–right up until the very end.

Marriage, as I saw it through their eyes, is made up of those tiny moments. Those little moments that you don’t even think about as you’re going through them, but later, come to realize were key pieces in shaping your life and the person you’d ultimately become.

Seeing how their love deepened while my father fought for his life makes me want to get married. To have someone to hold hands with as you walk life’s journey is one of those simple pleasures in life. Thanks, Mom and Dad, for teaching me that.” –Melissa Blake, the fabulous blogger behind So About What I Said

The Engaged Gal’s Take
“I want to get married because being with my fiancé makes me a better person. I feel whole when he’s around. Even though he can drive me c-r-a-z-y, he’s the only person I ever want to wake up next to & fall asleep with. We’ve already been through so much–high school, college, vacations, grandparents’ dying, a motorcycle accident, buying a house; the list goes on–and our relationship has become stronger though it all. I can’t wait to be his wife and experience all the good times to come!” –Jennifer Chemerika, adorable Merital Bliss reader whose wedding rings just arrived!

And for good measure…The Married Guy’s Take
“Because I couldn’t think of one good reason why I shouldn’t. Not one.” –my friend Nick Giammona, who’s been married to his wife Jen for five years

Why do you want to get married? Or if you’re already married, why do you think others should take the plunge?

<3 <3 <3 HAPPY VALENTINE'S DAY! <3 <3 <3 More About Marriage
Why The Office’s Mindy Kaling Wants to Get Married
6 Things Not to Say to Interfaith Couples
Is Open Marriage Still Marriage?