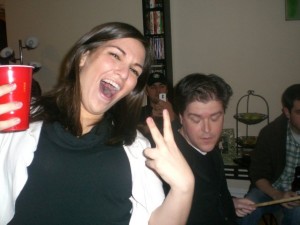 Paul and I used to have a very grumpy downstairs neighbor, unmarried 50-something Jill. On our first night in our apartment, she banged on our door to tell us we were being too noisy. We were painting, and the loudest sound she could’ve heard was the swish-swish of a wet brush against our walls. So maybe she has supersonic hearing because two years later she confronted me about some other non-noises she heard.

One day, I got into the elevator with her. She pressed my floor’s button for me, so I thought it was going to be a pleasant ride up. I was gravely mistaken. Here’s how our dialogue went.
Me: “Thanks, Jill. How are you?”
Jill: “YOU are loud.”
Me: Blank stare
Jill: “I hear things you don’t want me to hear,” she said haughtily while shaking her head with a condescending smile.

Now, nobody wants to listen to anyone else doing the nasty, but I honestly don’t think her goal was to get me to have quieter sex, which is pretty damn quiet already. She simply seemed determined to shame me for having sex with my husband–as if I should be embarrassed that other people know I get intimate with my spouse.

I wish I had said, “Funny, I never hear anything coming out of YOUR apartment,” but I never think of those oh-snap comments until I get back to my computer. It would’ve been true, though. She eventually scored herself a live-in boyfriend, Andrew, who appeared to be about 15 years her junior–and didn’t seem to like her much.

The evidence: He once knocked on my and Paul’s door when we had two friends over. When he didn’t explain what he wanted, we asked if we were being too noisy, and he said, no, not at all. He left, came back an hour later, and pretty much invited himself in to play Rock Band with us. After he did his own thing on the drums and lost the game, he admitted sadly, “I failed. Guess I better get back to my 50-year-old girlfriend.” Weirdest. Thing. Ever.

Until he did it again.

He showed up at one of our parties (during which we WERE being loud) and pushed my guests out of the way to get to the Rock Band drum set. The photo above is my extremely amused sister posing with Jill’s drum-playing boyfriend, while another one of our guests films the ridiculousness of the home intruder joining in our video game.

Anyway, Paul and I have since heard our next-door neighbors having sex (not Jill). They’re parents, so I’m proud they do it at all, let alone with such gusto. While I’d prefer they didn’t moan and grunt at 2 a.m. on a weeknight, I wouldn’t dare call them out for doing what married people should do. And it comes with the apartment-dwelling territory. If you don’t like it, get a house (which we’ll soon try to do).

Jill and Andrew recently moved out. I’m not sure if they’re back in an apartment, but I hope for all potential neighbors who occasionally have sex that those two have a completely detached house to call their own.

Have you ever been confronted about having sex loudly? Did you ever have to bring up sex noise to someone else?