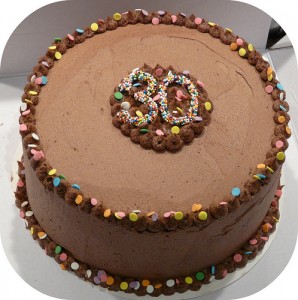 Though we’re (thankfully) several months away from turning 30, Paul and I have begun to think about how we’ll celebrate this milestone. But it’s unlikely we’ll get to do what many of our friends have done…

It seems almost everyone we know married someone born in a different calendar year from themselves. So the younger spouse threw a big ol’ birthday bash, with flowing drinks and platters of food, for the older spouse first; and the older spouses are now returning the favor for their (slightly) more youthful partners. It all works out quite well.

Paul isn’t even three whole months older than me, though. And we feel it’d be kind of obnoxious to force the exact same group of people to celebrate 30th birthdays for us within a single 90-day period. If we did each throw a party for the other person, our party-planning efforts might overlap–private party rooms in New York, especially the affordable ones, get booked up a few months ahead of time for a Saturday night.

True, we could do a single celebration sometime between July and October. But then it might not feel like a party for either of us since it’d be far enough from each of our birthdays. (I know, wah wah wah, poor us.) Luckily, Paul and I are pretty different people. I could see us casually gathering people to attend one of our favorite dive bars midweek on his actual birthday. And threeish months later, I might want to do a karaoke night to ring in my thirties.

All this is to say that not being the same age as the person you marry has its perks.

Would you prefer to be the exact same age as your spouse or have a year or more between your birth dates? Would you ever have a joint birthday party with your hubby?

More About Being Married
If You Don’t Believe in Marriage, Could You at Least Respect Mine?
6 Things Not to Say to Married Women Who Kept Their Name
Do Health Insurers Hate Childless Married People?