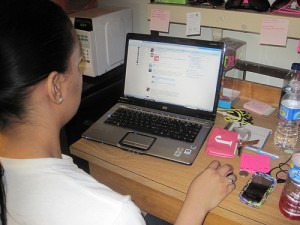 Everyone can assume that you’re so, so excited to get married. That’s why posts like the below can get pretty annoying pretty fast. True, your Facebook friends can simply hide you from their feeds if they don’t like what you have to say, but why push them to that point? Here’s what to avoid posting on Facebook (and Twitter, for that matter) when you’re engaged.

Play-by-Plays of Wedding Planning
I get it–you want to document your engagement. But posting wedding updates as Facebook statuses every day (or, worse, multiple times a day) is a quick way to annoy your Facebook friends. Limit these posts to the most exciting milestones and save the rest for a blog or journal.

Info That Only Invited Guests Should See
“Invitations are out!” “Please book your hotel rooms by tomorrow!” Yes, Facebook is great for sending out a mass message, but these reminders can upset Facebook friends who expected wedding invites but didn’t get any. As for friends who don’t care about not making the cut, they probably would prefer you refrain from posting things that don’t at all apply to them.

Countdowns to your Wedding Day
I admit: I made this faux pas. I was engaged for two (long) years, so when the number of days until our wedding finally hit double digits, I felt the need to let everyone know. In reality, no one cared–except maybe my closest friends and family. Actually, I don’t even think they cared. Doing this once won’t get you blocked by Facebook friends, though; doing this on an ongoing basis might.

Questions You Want Only Bridesmaids to Answer
A friend of a friend posted photos of potential bridesmaid dresses on her wall and asked, “Which do you like?” My pal gave her two cents, and the bride replied, “Sorry, I wanted opinions just from my bridesmaids.” So why post pics for all to see? Instead, create a private group exclusively for your wedding party and post to your heart’s content there.

Requests for Gifts
No joke, I once saw a post that said, “Friendly reminder: We’re registered at Crate & Barrel.” There’s nothing friendly about that. Asking for presents for yourself is never okay; making a plea over Facebook is even less so. Include that info on your wedding website and call it a day.

Complaints About Wedding Costs
Yup, weddings can be expensive. But no one wants to hear how you “dropped three grand on a wedding gown–ahh!” or that your “parents are refinancing their house to afford the venue.” These aren’t exactly actions to be proud of. Even if thousands of dollars is a drop in the bucket for you (want to switch jobs?), avoid sharing details of your wedding spending online. If you don’t, the result will either be people who feel bad about their less fortunate circumstances or people who find you obnoxious for talking about money. Or more likely, both.

All that said, don’t beat yourself up too badly if you’re guilty of any of the above (hey, I committed a couple, myself). They’re not friendship-ending offenses. Just put yourself in your Facebook friends’ shoes: Don’t you hate it when they post multiple updates on their child’s meals or pleas for you to vote for their dog to win some random cute pet contest? Everything in moderation, friends.

What’s the worst thing you’ve seen a bride post on Facebook? Married folks, ‘fess up: Which of the above have you done?