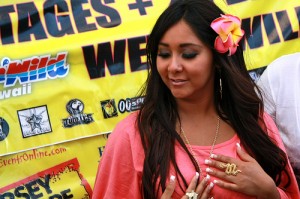 I’m not an expert in a lot of areas, but if there’s one subject I know a lot (probably too much) about, it’s Jersey weddings. Which is why I have a pretty good idea of how it’ll all go down when Jersey Shore’s Snooki and her fiance/baby-daddy-to-be Jionni get married.

The Wedding Ceremony
Jionni’s from East Hanover, NJ, and Snooki’s from Poughkeepsie, NY. If they don’t get hitched in Vegas, odds are, they’ll choose to wed closer to Jionni’s hometown since there are better wedding reception venues nearby. If she weren’t so publicly pregnant, I’d bet they’d exchange vows in Jionni’s family church, which is probably St. Rose of Lima, what the Internet is telling me is the only Roman Catholic church in East Hanover. But since Snooki’s expecting and everyone knows it, they’ll likely hold their wedding ceremony at their reception hall.

The Wedding Reception
“Simple and elegant” may have been the two words used to describe the weddings of every single bride I interviewed when I was an editor at Brides New Jersey. Snooki will want anything but. New Jersey is teeming with wedding venues with chandeliers the size of buses, but I have three good guesses on where these two will wind up.
The Crystal Plaza
It’s in Livingston, aka the town right next to East Hanover, and it’s held celebrity weddings before. I couldn’t tell you who (because I don’t know, not because I’m keeping secrets), but when Paul and I looked there (before we realized how pricey it was) their real weddings photo album included photos of guests like Billy Crystal and Larry David. The only deterrent Snooki and Jionni may find to getting married here? Too Jewish. (Hey, at least she’d be able to serve her beloved pickles.)

The Venetian
East of East Hanover is Garfield, NJ–a place you probably don’t want to visit, unless you have a wedding at The Venetian. This is where Italian brides who want to impress their Italian guests go to get married. Not unlike the eponymous hotel in Las Vegas, this place seems to be made entirely out of marble, and there’s a dramatic double staircase down which Snooki can make her grand entrance.

The Palace at Somerset Park
The princess of Poughkeepsie may prefer a palace for her royal(ly over-the-top) wedding, and this schmancy spot may be just the place. And she’ll definitely opt for the package that includes a fireworks display. I imagine she’d turn the “library” areas of the venue into Karma-like club scenes.

The Bridesmaids
Rider, the skinny blonde friend from Poughkeepsie who’s dropped by the Shore house a few times, will be co-maid-of-honor with Jenni JWOWW Farley. Deena and Sam will serve as bridesmaids, as will Jionni’s sister Gina. And all of their breasts will be on display in their low-cut bridesmaid dresses, which may be purchased at Park Avenue Bridals in Verona. The mic will be kept away from Deena who will want to remind everyone that she’s hooked up with the bride.

The Flowers
No flowers. Feathers.

The Wedding Cake
New Jersey venues tend to include wedding cakes in the reception package, but obvi Snooki would get hers specially made by Buddy Valastro, aka the Cake Boss in Hoboken. She will jokingly suggest that he create a cake she can pop out of. Okay, half-jokingly.

The Favors
Glass jars of pickles etched with “We were dill-ighted to have you at our wedding.”

Okay, so there’s more to weddings than the above elements, but you get the idea.