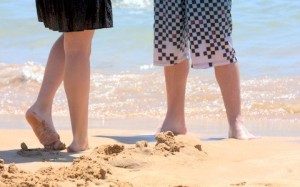 Despite the title, I promise this post isn’t a downer–far from it. In fact, you just may crack up at what inspired it.

Last night, two of our couple friends came over to our apartment for dinner. My middle-school yearbook caught the eye of one of our pals. Next thing I knew, our four guests were thumbing through the pages, laughing at all the girls’ dark-brown lipstick and how all the guys listed baseball player as their future career.

But what got the biggest chuckles were things I wrote…all about Paul. Above my own picture, I wrote “I love Paul!” In the four lines we each got printed in the yearbook, mine said, “As I learned in ’96, dreams do come true,” a reference to the fact that Paul and I started dating. And I wrote a long-ass description of every single thing that happened in 1996, from fashion fads to popular movies, in which I referred to my now-husband as Paul (sigh) DiPilato.

Though our pals knew all about our storied past, this was the first time they were seeing physical evidence of the first months of our relationship–and my outright obsession with Paul. I was, naturally, fairly embarrassed about just how fully I threw myself into a schoolgirl crush, even though one of my friends was touched by how serious I was about him.

Later, my slight humiliation turned to sadness. I no longer dreamily sigh at the mention of my husband’s name. I don’t still feel the need to profess my love for him above any printed photo of me. Does this lack of infatuation that used to be so present mean I’m not as in love with him as I once was?

Quite the contrary. While I don’t doubt that my love for Paul then was as real as it is now, it’s grown up a lot, just like we both have. For the first six-ish months, I was constantly thinking, “Ohmygod, my crush likes me back!” and though I don’t take his return love for me for granted 16 years later, there’s a lot more to our relationship now than the mere acknowledgment that our feelings for each other are mutual.

I know Paul and I have been together from a younger age than most of you, but I think at some point, every couple realizes that the honeymoon period is over–and that’s a good thing. Now you can share the uglier details that may not have come out in those first months–and you’re not scared off by them. Now you can work toward a future together, instead of simply celebrating that you’ve coupled off.

Partners who live in a perpetual state of infatuation don’t have the chance to prepare for hard times that every married couple faces. So instead of bemoaning the waning of your former obsession (or near-obsession), embrace it because you’ve made it to being a real couple who can stand the test of time.

Were you once infatuated with your man? When did it hit you that it passed? Or are you still in the infatuation state and hoping it never ends?