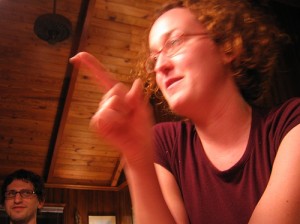 Some people think they know what’s best for you better than you do. And if one of them speaks up during your engagement, it can make you second-guess yourself or ruin the relationship you have with that person. Before you sever ties with the brazen individual–or call off your wedding–consider doing the following.

Figure out why they’re telling you this.
Your impending marriage can make a never-married person, an unhappily married person, or a divorced person jealous. And if they can’t be happy, then, well, why should you get to be? Or, if the protest is coming from someone who’s been married, they may want to shield you from repeating their mistakes. Or maybe you’ve been married before, and this person is afraid of having to help you through another messy breakup. Or if this is someone from an older generation, they may not like that your partner isn’t the same color or religion as you–or is the same sex as you.

Hear them out if you care to.
With their motivations in mind, listen to them (if you respect their opinions, that is–if you don’t, feel free to tell them to take a hike). Just remember that their own experience and goals can factor heavily into what they’re telling you. But they may have a perspective you didn’t consider–or information you don’t have. Unless they prove that your betrothed has a secret family in the Ozarks or a string of robberies under his alias’s belt, nothing they say should change your mind if you’re happy with your well-thought-out decision to get married.

Address their concerns if you feel up to it.
You don’t owe anyone but yourself an explanation as to why you’re getting married. But if you want to defend your decision, calmly tell them why you’re ready for marriage (when they say “You’re too young!”) and why your partner is perfect for you (when they say “You don’t know each other well enough!”). Reasoning with a plain ol’ prejudiced person probably won’t go anywhere, though.

End the conversation.
You’ve listened. You’ve shot down their arguments. Now it’s time to move on. Try saying something like, “I appreciate your concern, but I don’t take marriage lightly and I thought long and hard about my decision before I made it, so I’m going to stick to it. I hope you can support it–and I’m sorry if you can’t.”

Don’t discuss your wedding with them if they still think you’re making a mistake.
Some stubborn souls won’t care that you’ve been dating your intended for 10 years or that you’re going for pre-marital counseling. And it won’t be worth your time to try to convince them you’re making the right choice. So rather than tempt them to speak out against your upcoming marriage, avoid the topic. And maybe don’t invite them to your wedding. Or do and seat them next to the DJ’s speakers.

Did anyone tell you that they didn’t think you should get married? Did you ever tell a bride or groom that? How’d it go down?

More About Marriage
3 Ways to Answer 3 Common Questions for Newlyweds
Why Get Married?
Is Open Marriage Still Marriage?