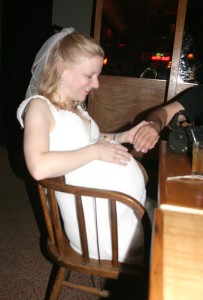 There’s really only one good reason to get married: because you’ve found your soul mate, you know each other well enough and long enough to be positive you want to spend the rest of your lives together, and you’re mature enough to work hard at keeping your relationship strong. But there are so many bad ones. Here are the six worst.

Your ex is engaged.
Since Paul and I are childhood sweethearts, I can’t pretend to know how excruciatingly painful it is when you learn that someone you thought you might one day marry is marrying someone else. Still, his impending nuptials shouldn’t accelerate the relationship you’re in toward forever. Whenever celebrity exes get engaged to new loves around the same time, I can’t help but think the other’s engagement is the main reason for the second betrothal.

You’ve been dating a while.
Longevity alone isn’t enough to qualify your relationship for marriage. It’s certainly a nice foundation, but it takes so much more, like shared dreams and mutual respect, to be ready for marriage. Don’t take the next step solely because it’s the next step; be sure you’re perfect together.

You’re pregnant.
Rush to the altar because you have a baby on the way, and I assure you you’ll trip. You don’t need to be committed to someone to have sex that ends up creating a person. You do to marry them. Sure, you two will share a link as long as you two and your child’s alive, but if my college thesis is to be believed, children who live in a happy single-parent home are better adjusted than children who live in an unhappy two-parent home. While I only know of a few couples who got married during a pregnancy, all of them got divorced shortly after. BUT if you were moving toward marriage anyway and, whoops!, there’s now a baby on board, that shouldn’t disrupt your wedding plans.

Your friends are married.
It’s nice not to be a third, fifth, or seventh wheel when you go out with your coupled-off pals. It’s not as nice when you wish you held out for someone besides the person who makes you a twosome. Besides, good married buddies will hook you up so you won’t be single for long.

Your family wants you to.
Arranged marriages have worked for centuries in non-Western cultures (and probably some Western ones too). But if you don’t see yourself being happy with whomever your relatives see as your match, don’t get hitched. Or maybe Mom and Dad like the boyfriend you’ve chosen for yourself and are sick of waiting to throw you the wedding they’ve dreamed of planning. Nope, still not a good reason to head into matrimony. Only you and your guy can decide when you’re ready.

You’re worried you won’t find anyone else.
You will.

Do you think any of the above are actually good reasons to exchange vows? Any other extraordinarily crappy ideas to get married?

Photo by Mel B