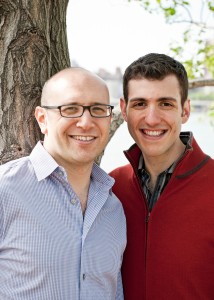 As you no doubt know, Barack Obama finally spoke out in support of gay marriage, a first for a sitting president. This stirred up all kinds of emotions in Americans, especially in my former college suitemate, Michael (that’s him on the right). I’ve been lucky enough to have been Mike’s friend as he navigated dating life in our Brandeis days to when he proposed to his wonderful boyfriend Aaron (the bespectacled guy on the left). And in June, I’ll witness them tie the knot. Michael drafted a letter to the president, a must-read if I ever saw one.

On behalf of my partner and our families, I would like to thank you for coming out in support of same-sex marriage today. I understand from your interview that this was a decision not easily reached, but I appreciate your ability to think rationally and compassionately about an issue that affects countless Americans whom you represent.

Thanks to the forward-thinking nature of my home state, my partner and I will wed in a small ceremony in NYC on 10 June of this year. We have been in a committed, monogamous relationship for over seven years, which has outlasted the marriages of many of our heterosexual relatives, colleagues, and friends.

We live in the hope that one day, our union will be recognized by the country in which we live. Therefore, I must thank you for bringing us one step closer today.