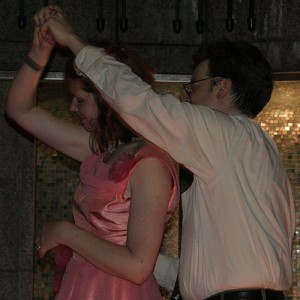 A dirty little secret about brides: Besides wanting to celebrate their own luck in love, many hope that their weddings will lead to new relationships. I was no exception.

Perhaps the most stressful part of wedding planning, after the family drama, of course, was assigning seats for the reception. The one thing that got me through it was the matchmaking opportunities. Though I didn’t have all that many singles looking to mingle attending my wedding, I was damn sure to seat the potential pairs together.

Obviously, I had lots on my mind as the reception wore on, but about halfway through the party, I spotted two friends whom I thought might hit it off hitting it off! From that moment on, I was fixated on their flirtations.

“They’re dancing!” I reported to no one in particular during an upbeat set.

When the guy took a break from getting his groove on, I checked on the gal, who confessed what I already knew: She was into him.

I told her the feeling was mutual, having known the guy since second grade and being able to read his body language all too well.

“You know he has a hotel room nearby, right?” I added.

She hadn’t. But she was set to get a ride home right after the party from another guest.

“He’s such a nice guy. I’m sure he’ll make sure you get home safely.”

She was sold. Her plan was to stay at his hotel room, if he invited her.

I think I missed the chance to say goodbye to some early departing older guests because I was on the hunt for my guy friend to let him know that his dancing partner was ready and willing.

“Really?” he asked with wide eyes.

I nodded to confirm.

I thought my work was done, so I returned my attention to my other wedding guests, feeling satisfied that I had helped forge at least one connection.

I watched my two buddies out of the corner of my eye as the last song of the night played. Much to my dismay, my guy friend came to bid me farewell–alone. I thought for sure that my girlfriend had (reasonably) decided against staying in a hotel room with a guy she barely knew, despite my assurances that he was one of the good ones.

But when she came to say goodbye, I learned it was just the opposite.

“He didn’t offer, so I wasn’t about to bring it up,” she explained.

I should’ve known that my male friend was too good of a guy to take advantage of a single girl at a wedding.

She was visibly disappointed, but not as much as I was. Despite marrying the love of my life that night, I felt like a failure, having been unable to spread the romantic wealth.

Fellow brides, did you/do you want your guests to find love at your wedding? Would you have felt a little bit proud if a connection was made? Have you ever hooked up at–or just after–a wedding?