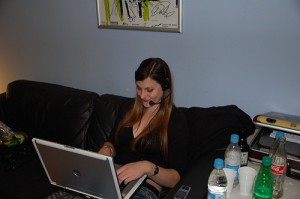 Few things have floored me as much as this announcement from soon-to-be-married friends of friends. But maybe I see things differently…

A couple that’s getting married soon has decided to spend at least their first year of marriage apart. There’s no military obligation to do this. Their jobs aren’t requiring them to relocate. They simply want to live in other countries while they’re still young, and the countries where they can get work happen to differ.

Living apart from Paul during college was tough on me. Even with visiting each other once a week, not seeing each other as often as we did in high school (nearly every day) was pretty much the only thing we fought about. So when we moved in together after college, it was like all our problems were solved. No matter how often his snoring kept me awake (and still does), getting to spend 99.99% of nights with Paul has been one of my favorite parts of marriage.

I understand wanting to live outside of your home country before you start a family–you know, when you realize you’d prefer to be close to the one who raised you. And I get that careers can force you to make difficult choices about where you live and how much time you spend with your spouse. But I don’t understand the point of getting married if you want to live across the world from your partner.

To be fair, their transcontinental arrangement wouldn’t last more than a year or two. And with modern conveniences like Skype, it’s easy to stay connected. Still, no real-time video of Paul compares to feeling his arms around me or being able to kiss him mid-sentence. I don’t think anything is alluring enough to keep me from doing that for any substantial amount of time. But maybe I’m the weird one and this couple is more the norm!

Would you live apart from your husband for many months? If so, what reason would be compelling enough to reside half a world away from him? If you had to live apart, do you think it’s better to do this early in your marriage or later on?