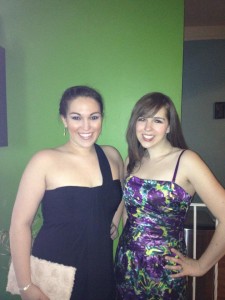 Yesterday was my first wedding (of six) for 2012. It was also the first-ish time I went to a wedding without Paul since we were married, and I had some funny realizations.

To clarify, I actually attended another wedding without Paul. I was a bridesmaid, so I was very busy throughout the wedding weekend. Plus, I had a whole table of friends to keep me company. And this was in Indiana a few months after our wedding and after we bought our apartment–we literally didn’t have enough money for both of us to get there and back.

The wedding I went to yesterday, on the other hand, was not one for which I was in the wedding party. In fact, I hadn’t technically been invited. My sister Gillian’s good friend was getting married about 10 minutes away from my apartment, and she asked me to be her plus-one (that’s our pre-wedding photo session that our mother mandated, not that we weren’t willing participants). I hadn’t thought about how different it would be not having Paul there, but boy was it ever.

First, the wedding ceremony took place outdoors atop a very tall building. Though it was a beautiful sunny day yesterday in New York, the wind gusts seemed to approach hurricane velocity up high. My mother smartly reminded me to bring a sweater. Still, had Paul been next to me, I surely would’ve requested his suit jacket for extra warmth, and he would’ve obliged.

During the cocktail hour, Gillian and I took turns holding our table and fetching food and drinks. Since I’m one of the clumsiest people you’ll ever meet (aside from my sister, that is), Paul usually takes care of drink-grabbing when we’re at a wedding together. Luckily, Gillian and I both managed to avoid major in-transit catastrophes, though a few fried calamari did swim off my plate as I carried it from the buffet to the table.

Gillian and I were first to our reception-room table. Then a heterosexual couple sat down. Then another. Then another. And then one more with a teenage daughter. I think at least one duo assumed Gill and I were lesbians. The rest seemed to figure out from our shared features that we were in fact sisters.

A strange thing I learned about myself: I instinctively get up whenever slow songs play at weddings. This is likely because Paul, who hates dancing of any kind, humors me when he’s required only to sway slowly with his arms around me. I quickly remembered I didn’t have my husband to slow-dance with and planted my butt firmly back on the seat.

The flip-side to this is Gillian was thrilled to accompany me on the dance floor for the fast-paced songs, which was a nice treat. I was also delighted that Gill was as willing as Paul tends to be to share her food with me. And it was nice not to be the only one getting emotional during the ceremony.

Have you ever attended a wedding without your guy? What were the pros and cons you experienced?