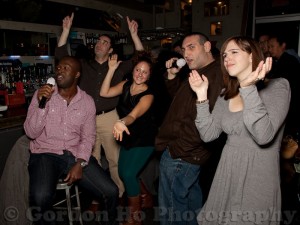 Paul’s a fairly predictable person–or maybe it’s just that I’ve known him for 18 years, so I can predict most of his moves. But I have to say: This past Friday night he did something I didn’t think he’d do if his life depended on it. And it was really strange.

Yes, my husband, the one who won’t willingly sing happy birthday to his best friend, even in a large group, took the microphone at karaoke. And despite four vodka-cokes and no food since lunch, he sang pretty well.

I absolutely love singing, whether it’s at karaoke night or while playing Rock Band. Paul couldn’t detest it more, so I literally hadn’t heard his singing voice, outside of the occasional forced happy birthday, a song he always intentionally sang badly. (Why, I couldn’t tell you.) I made Paul promise to sing to me when I’m in labor one day to calm me down, even though he assured me that his lack of expertise might stress me out more. And I truly didn’t think I’d hear his singing voice before then.

It’s funny what “We Built This City on Rock and Roll” can do to Paul. He requested it without me realizing it and grabbed the mic for an on-key rendition.

I was really excited–it seemed for once he was enjoying karaoke night rather than begrudgingly attending because he knows how much I adore it. Plus, I loved listening to him.

Then again, I was also confused. When the person you know better than anyone else in the world does something completely unexpected, it can make you uncomfortable. Silly as it is, I was asking myself, Do I really know Paul that well?

I remembered that I wondered that same thing the first time he ordered sushi of his own volition–and when he called me “Mer” after years of using my full first name. Thankfully, we’ve both grown and changed since we started dating at 13, and it’s these simple, new experiences that keep things interesting.

Did your guy ever do something you didn’t know he could do? How did it make you feel?