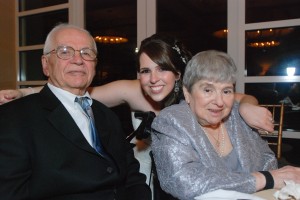 My grandmother had been suffering from Parkinson’s disease for decades. And this past Wednesday, June 20th, she stopped suffering.

We knew the end was imminent a few weeks before. Although Paul’s not a fan of making the two-hour trip to my grandparents’ house in South Jersey, we drove down there on a weekend to see her and, while I wouldn’t admit it, to say goodbye.

I shouldn’t have been embarrassed for Paul to see her like this. After all, he had seen her unshaven legs, her underwear (when she’d sit in her wheelchair in an ill-fitting nightgown), her half-eaten food that had dribbled down her chin, her constantly shaking limbs, and her swollen bare feet. But her mind was all but gone during this last visit. Save for a few moments of clarity, when she told me my hair was too long and that no, she didn’t want me to sing to her, she was paranoid. She violently rejected food because she thought we were trying to poison her. She accused her home health aide and her husband of 64 years of conspiring to kill her. And she confided in me as Paul stood nearby that a rabbi told her that the latter was true. I shouldn’t have been embarrassed, but I was.

Not surprisingly, her refusal to eat caught up with her. My family respected her wishes, that were declared when she was in her right frame of mind, not to hook her up to machines to sustain her. She passed away in her sleep, less than a month shy of her 83rd birthday.

This Sunday, we returned to South Jersey for her funeral. I’m lucky in that I haven’t lost anyone close to me, except for my dog Skippy, since my father’s mother died when I was 4. But I’m unlucky in that I wasn’t prepared to experience the raw emotions associated with burying a woman who had never not been in my life, let alone watch my parents, sister, cousins, and grandfather express–and repress–grief.

Paul was the perfect person to have by my side. Somehow he knew when I wanted him to hold my hand more tightly and when I was way too warm to be comfortable in his arms (the sweat may have tipped him off). He also seemed to understand instinctually when it made sense for me to be with my family, when I needed him, and when I wanted to be alone.

Paul listened intently and encouraged me with his eyes as my sister and I read the speech we had struggled to write the night before. And he joined me beside Nana’s grave to shovel dirt onto her casket, with the ideal blend of hesitance and obligation, as is Jewish tradition.

I was yet again reminded how fortunate I am to be married to my husband. I hope my grandparents realized their good fortune for having each other as long as they did.

Now, the last video I took of my grandparents together. Fittingly, they were talking about what they remember about their wedding and honeymoon.

Grandparents Reflect on 63 Years of Marriage