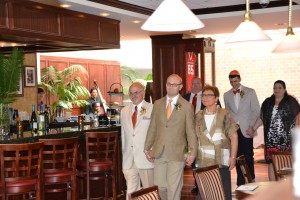 Ordinarily, I crash almost as soon as I get home from a wedding, especially after a two-hour drive, most of which was spent in traffic. But I didn’t want to fall asleep and risk forgetting some important things that occurred to me at this afternoon’s event.

I knew I’d cry today because I cry at every wedding I attend. But I was brought to tears for a very different reason than the usual, “Ain’t love grand?” This afternoon’s ceremony ended with the cantor (a singing rabbi, for the uninitiated) pronouncing my friends married “by the power vested in her by the state of New York.”

“But we’re in New Jersey,” I thought–and then remembered that the state of New Jersey doesn’t recognize my friends’ marriage.

You see, the people who got married today are both men, my wonderful friends Michael and Aaron. Their ceremony was much like every other Jewish wedding ceremony I’ve seen–they each walked in with both parents on their arms, and they exchanged vows under a chuppah, a wedding canopy. For that matter, their nuptials were just like all wedding ceremonies–the couple’s closest friends and family were there to witness, and it was obvious to everyone in attendance that the two souls entering into marriage were so deeply in love with each other. The key difference, though, is that just a year ago, their marriage wouldn’t have had the same standing as mine in the state we all currently live in.

Later, the couple’s friend, siblings, and parents made touching speeches. And Janice, Michael’s mother, said something that really struck me. Through tears, she thanked everyone in the room for supporting her son and now son-in-law. While every proud parent of a bride or groom likely feels this way, it was apparent that her gratitude went one step further because, sadly, not everyone is as supportive of same-sex marriages as they are of the other kind.

It made me feel a tad foolish. I never doubted that, once I found the perfect person, I’d get married. Paul and I were born with the right to marry each other because I have lady parts and he has man-atomy. Who could stop us?

But the government could stop my gay friends. While I’ve known this to be true, it wasn’t until today, my first same-sex wedding, that I’ve become thankful I didn’t have to fight for the privilege to have a legally recognized marriage. How wonderful it is to be straight, right? But man, am I more outraged than ever that some states, including Michael’s home state of New Jersey and Aaron’s of California, still don’t see that same-sex marriage is every bit as valid as its hetero counterparts. And that same-sex weddings, in infinite ways, are so similar to hetero ones. Except Michael and Aaron’s was way more stylish than mine.

Gratuitous photos from the wedding! 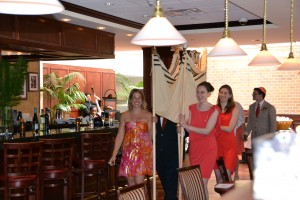 The orange-clad attendants carrying in the chuppah 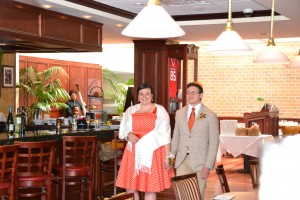 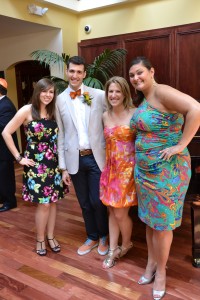 Me with Michael, Stephanie, and Rachael, my junior-year suitemates