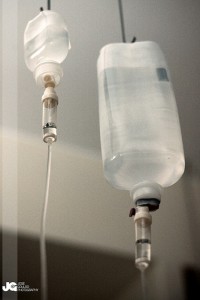 At 6:45 a.m. on Wednesday, Paul touched my arm and shook me a little. I woke up to see him sitting up in bed, wide awake, with his glasses on, a startling sight given that Paul usually wears contacts and doesn’t use corrective lenses of any sort when he’s sleeping.

“I think I need to go to the emergency room,” he said simply.

My eyes may have been open, but my brain didn’t quite turn on yet, though I had the presence of mind to ask, “What’s wrong?”

He explained that he was experiencing some pretty intense pains and shared the scary potential diagnosis he found online.

“What time is it?” I asked, not fully processing the gravity of the situation–just knowing I felt very, very tired.

Paul shared that it was an hour before my usual wake-up time. He then returned to the subject at hand and explained he was going to head to the hospital.

“Do you want me to come with you?” I asked half-hoping he’d say no. Again, I wasn’t comprehending what was going on.

“You don’t have to,” he said honestly, but my brain started working, and I realized it’d be ridiculous if I didn’t join him.

“Give me five minutes,” I told him.

He wasn’t writhing in pain or even complaining. He just waited patiently by the door as I threw on clothes and put on some deodorant, not in that order.

And off we went to the nearest hospital, which didn’t get such terrible reviews online as I had dreaded. The waiting room was empty, and Paul was admitted only a couple minutes after we arrived. And he was soon whisked away to a bed. I sat beside him in a hard chair as a nurse ran down what would be happening over the next couple of hours.

I left Paul’s side only to use the potty and when they drew blood/inserted an IV because I started to feel faint. (I first discovered my squeamishness at age 14 after learning about the circulatory system in biology class and promptly passing out in Paul’s arms; I would’ve fallen on the unforgiving tiles of our high school’s halls had he not caught me on my way down).

I was nervous the whole time, even though Paul would smile at me whenever I looked over at him. You’d never know he was in the most excruciating pain of his life. The experience was made worse by moaning patients separated from us by a thin, partially closed curtain.

The hardest part was when he was put in a wheelchair and pushed to a room to undergo an ultrasound. As we waited for the technician to arrive, I stood behind Paul, running my fingers through his hair, hoping to comfort him and, to be honest, comfort myself. I fretted over what the ultrasound would find, and when the technician showed, I was upset that she asked me to sit in the waiting room while she examined him.

Many minutes later, a passing nurse asked me if I was waiting for an OB, a reasonable question given that most patients on the floor were undergoing ultrasounds because they were pregnant. But the query rattled me because at this point, I was concerned Paul would get bad news that would stand in the way of us having kids someday. Yes, it was THAT kind of pain.

After watching a fashion show and a Miranda Lambert performance on The Today Show, the ultrasound technician found me, and Paul and I were on our way back to his bed in the ER.

Hours later, a group of physician’s assistants, nurses, and residents gathered around Paul to manhandle him some more. Then, they offered a diagnosis.

Nothing. There was nothing they could tell that was wrong.

As glad as I was that the ultrasound was clear and the bloodwork was normal, it was unsettling that no one could offer an explanation as to why Paul was in so much pain, a pain that hadn’t subsided. A doctor came by and admitted he was equally mystified. He was discharged. After the ordeal, Paul admitted he would’ve rather have had emergency surgery that would correct the issue than to not know what was wrong and how long the pain would last.

One day later, Paul’s feeling better, even though he hasn’t taken medicine stronger than a Motrin. I’m hoping his epic nap, from 1 to about 6:30 p.m., magically healed him. And as nice as the hospital staff was to us, I hope never to go to the ER again.

Have you or your partner ever had a health scare? How did you handle it?