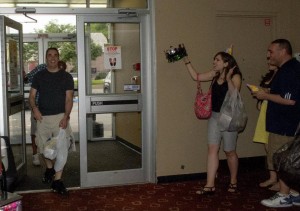 Remember when I was flummoxed over what to do about celebrating my and Paul’s 30th birthdays? Well, I decided that a separate surprise party for Paul just before his 30th in July was the way to go. But I didn’t anticipate how hard it would be to keep it a surprise.

Paul and I tell each other everything–everything that we remember, anyway. So keeping a secret, even one that’s meant to benefit Paul, felt unnatural. When I found out Paul’s college friend from Boston was coming down for the party, I almost blurted out the good news to the soon-to-be birthday boy. When his other college friends couldn’t make it, I wanted to warn Paul so he wasn’t disappointed when he arrived at the party. And when guests ignored the reply-by date, delaying me from giving a final count to the bowling alley where we held the party, I wanted to complain to Paul, who reminds me that these things aren’t as big a deal as they seem in my head. But if the party was to be a surprise, I had to hold my tongue on all of these things.

Not that all that meant Paul was completely shocked when he pulled up to the bowling alley with our friend the Saturday before his birthday. Apparently, I wasn’t as good a secret-keeper as I thought. When Paul was an invited to an event the next day, I let him know we might have guests staying over that weekend (when I thought our Boston buddies were staying at our place). And when I couldn’t afford to invite every single person we knew, I asked our good friends not to mention the party to others…except Paul was standing right next to me when I made this request. D’oh. Despite that, Paul played along with the ruse that he was going to a friend’s apartment to watch the Oscar shoe-in Jersey Shore Shark Attack and didn’t pester me with questions about the party.

As a result, Paul had a great time with 15 of our close friends. He managed to turn bowling into a violent sport, as he’s wont to do, which led to him scraping his shin and ripping open his shorts. Luckily, our guests weren’t hurt, as far as I know.

I don’t know that I’ll attempt to surprise Paul for his birthday again, but he did ask me not to hurl questions at him regarding his plans for my 30th birthday, in hopes that I truly will be surprised. Deal. 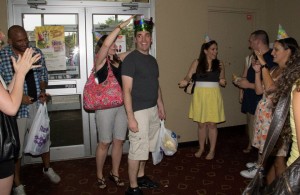 While the rest of us wore kid-size (re: uncomfortable) party hats, the birthday boy got to wear a special crown. 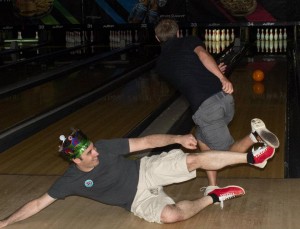 It didn't take Paul long to start sliding into other bowlers to knock them over...or to tear open his shorts. 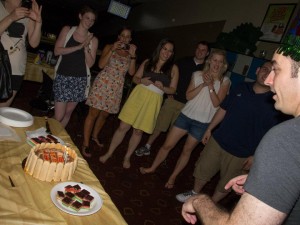 We gathered around tiramisu cake and rainbow cookies to serenade the guest of honor with a rousing rendition of "Happy birthday."