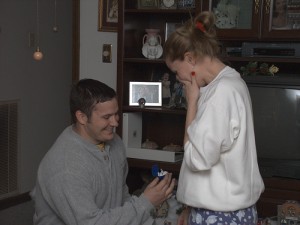 Ladies, if anyone knows what it’s like to be ready to get engaged and not have a ring on your finger yet, it’s me. Even though I was super-young when I was set for Paul to pop the question–at the ripe old age of 21–we had been dating for eight years at that point. So when he still didn’t propose by our 10th anniversary, I was antsy to say the least. Luckily, the proposal came a few months after we hit the 10-year mark, and I think it happened when it did because I did a few of the following things.

Plan a trip to a romantic destination.
The second-biggest reason Paul hadn’t proposed (I’ll get to the biggest one soon) was that he didn’t know where to do it. We didn’t have a favorite spot in New York, the city we called and still call home, that would make an appropriate setting. So two years after college, once we were in stable jobs that paid enough to cover our bills plus a little extra, I suggested we go to Paris. I had always wanted to go, and Paul was itching to travel, so we figured a place where I kinda sorta spoke the language would work. And while I couldn’t guarantee Paul would propose while we were there, he seized the opportunity.

Pay for your partner’s expenses.
Okay, so the biggest hindrance to Paul popping the question was money. Even though he wasn’t living paycheck to paycheck, he didn’t exactly have a few grand in savings to fund an engagement ring quite yet. Not that I did either, but I had enough to cover both halves of our rent for a couple of months. Paul was too proud to let me pay for my own engagement ring, otherwise I would’ve ponied up in that way. But at least paying our biggest living expense helped him save a bit faster.

Make it clear you don’t need a big diamond engagement ring.
A lot of guys have it in their heads that they need to invest in a center stone that’s at least a carat–some think 1.5 ct. is the minimum. So not true. If you’d be happy with a .5 stunner on your finger, let your guy know. That way, he needs less time to save up.

Make it clear you don’t want a diamond engagement ring.
Maybe you prefer the look of a colored gemstone. Great! They’re often more economical than diamonds. But unless you convey that to your man, he probably has no idea. Again, once he’s aware, he’ll be able to rustle up the funds faster. Don’t want a ring of any kind? Clue in your guy, pronto.

Propose yourself.
If getting married is your main objective, and you’re pretty sure your main squeeze is into it, just ask him your damn self. No couple is any less married because the gal popped the question. Besides, if you’re a same-sex female couple, a gal HAS to pop the question.

And one that doesn’t work…
Issue an ultimatum.
I tried and failed. I said, “Paul, if you don’t propose by our 10th anniversary, I’m breaking up with you.” It was so stupid. We made plans to go out for dinner that night at a restaurant there was no way he’d propose in. So not one bit of me expected to get engaged that evening. But we had a great night. How was I supposed to end our happy relationship after that? When I playfully reminded him that I was supposed to dump his ass, he asked me not to and reminded me that he’s simply saving for a ring. Despite me saying I didn’t need a ring, he was fairly hell-bent on buying me one. And he did just three months later.

Who out there’s just dying to get engaged? Would you try any of the above to get a proposal faster? I highly recommend being patient–seems like the girls who shut up and wait are the happiest when it finally happens.