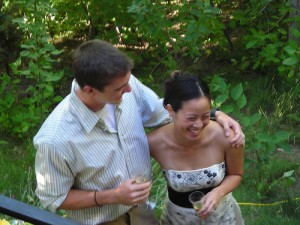 After a string of not-so-fulfilling relationships, my friend is seeing a guy that she and everyone around her believes to be “the one.” And they said “I love you” to each other for the first time this weekend…which got me thinking of the first time Paul and I uttered those words.

I told Paul I loved him before we were even dating. (Here’s my Glamour post about how I knew I fell for him.) His very mature response was “Well, I loathe you.” (Hey, he was a 13-year-old boy; I should’ve known better.) My heart fluttered as I optimistically thought he randomly decided to pronounce “love” with a long o. Paul clarified that no, he said loathe, like detest.

Just a few months after that phone call, Paul was my boyfriend, and while he hadn’t fallen in love with me yet, he no longer loathed me.

He laughed. I didn’t know what was silly about it. I truly felt that if the highest amount most people could love other people was quantified as a 10, then my love for Paul was surely 3.8 times that number.

This was January, the first month we were officially a couple. Fast-forward to June.

We had been hanging at a friend’s house a few days after our epic middle-school senior trip to Six Flags (one I almost didn’t get to attend because I told a substitute teacher I should be excused from class because I was a Meredithian and it was a high holy day for my people). I was proudly wearing the Y-necklace (remember those?) that Paul had won me out of a claw machine. I remember how Paul couldn’t stop hugging me that day. I was on cloud-9.

His mother picked us up from the pal’s home and dropped me off. Just before I got out of the car to walk up the brick pathway to my parents’ house, Paul said, “Check your pocket,” and then he closed the door.

I was so confused and anxious, but I waited until I ascended the three flights of stairs to my room (my house wasn’t big; it just went straight up) to see what was inside my denim shorts–just in case it was something I wouldn’t want my parents to catch sight of.

I put my hand in my pocket and felt a folded piece of shiny computer paper, you know, the kind you used for important stuff back then. I unfolded it and in blue printer ink in a pixelated font because it was so huge was the number 38. There were many little 38s all around it. It also said, “Congratulations! You did it!” It was Paul’s way of telling me that he finally felt as strongly about me as I had about him. I couldn’t stop smiling, even though I felt silly that he was probably hugging me so often so he could shove something in my pocket without me realizing it.

All that said, I hope 16 years into my friend’s relationship (yes, Paul and I have been together for 16 years now), she can look back as fondly on the first time she and her guy exchanged I love yous as I do on my big 38 moment.

How did you and your sig other first admit you were in love with each other? Did you ever tell someone who wasn’t ready to say it to you?

More Pre-Engagement Fun
5 Ways to Get a Proposal Faster
Should Men Wear Engagement Rings?
The One Thing You Shouldn’t Do Right After You Get Engaged