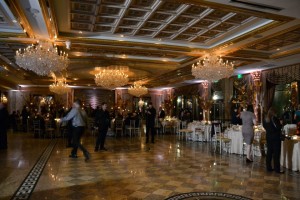 Yesterday, Paul was a groomsman for his good friend, Ian, as he married his match, Charleen. And I came to Charlian’s wedding (as I called it) prepared with tissues for wiping tears–and my nose–during the ceremony. For a change, though, I didn’t end up blubbering during the vows. Even as my friend, Amber, teared up beside me in a pew of the pretty church, I didn’t once reach inside my bag for a hanky. I also managed to keep it together during the first dance and the parent dances. Despite all that, my mascara was running by the end of the night. Here’s why:

Ian and Charleen upheld one of my favorite wedding traditions: the anniversary dance. For those who are unfamiliar, this is when the MC invites all married couples onto the floor for a slow dance. (Last night, it was to “Unchained Melody.”) As the song goes on, the MC asks couples to return to their seats based on how many years they’ve been married. The first to go are those who’ve been married for only a year. Paul and I survived that cut. Next to leave: those who’ve been married for five years or less. Sadly, Paul and I narrowly missed the mark to keep dancing. The game continues until there’s only one couple left on the dance floor–the marrieds who’ve been together the longest.

But last night there were three adorable couples left standing. They’d all been married for 50 years, resulting in a three-way tie. “This is a first,” the MC admitted.

As I looked across the room at those six aging, graying, happily married folks, I lost it. I had spent some of the downtime before the ceremony and between the ceremony and reception discussing the harder parts of marriage and getting married with a fellow guest. We talked about the difficulties that arise when you don’t share a religion with your spouse-to-be, the countless other conflicts that crop up during wedding planning, and the problems that persist long after the vows are exchanged. Even if our particular issues aren’t universal, I’d guess that the marrieds on that dance floor had faced their fair share of obstacles. So it was uplifting to see that despite the odds, love prevailed. And 50 years after they first said “I do,” their marriages are continuing on.

I was trying to silently sob so as not to call attention to myself, but Amber, who was equally weepy, caught me. Her husband, Rich, looked at me, and then Paul turned in my direction to see what they were looking at. He was shocked to see the black-tinged tears dripping down my cheeks. “It’s just so sweet!” I said to explain my reaction.

I really hope the anniversary dance tradition lives on long enough for Paul and me to be the last ones on the dance floor at some as yet unborn couple’s wedding one day.

Have you seen the anniversary dance before? Would you want it at your wedding? (It was supposed to be at ours, but our MC forgot about it! My grandparents–who were married 59 1/2 years at the time–would’ve won.)