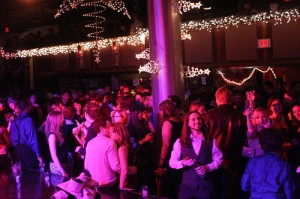 Last week, I asked one of Paul’s co-workers what she’s wearing to their company’s semi-formal holiday party. She went on to describe two beautiful-sounding options and asked me to help her choose. Then, she asked what I was wearing to the event. “Oh, I’m not invited,” I said sadly. Shock crossed her face. Here’s why I suspect that happened.

Paul and I go out almost every week–sometimes twice a week–with his colleagues. He’s been working with lots of the same people for more than eight years now, so he’s had lots of time to get close with them. I, on the other hand, have had eight jobs in as many years. And while I’ve made work friends along the way, there isn’t really a group of us that still hang as often as Paul’s pals do.

Some of them no longer work at the company, and obviously, they weren’t extended invites to the holiday party. And there’s also a gal who used to work there who’s dating a guy who still does–and she doesn’t get to go, either. The company’s a lot larger than it’s been in past years, and they’re holding the party at a swanky Manhattan location, so of course I understand why they can’t invite everyone with a plus-one. I actually have plans for the first couple of hours of the party (performing carols with a holiday singing group in my office building!). But none of this is a comfort to me.

Because so many of my friends, people I’m thrilled to meet up with whether or not Paul can make it, will all be in one place partying in their fancy-ish duds, I’m bummed to be excluded. I wish spouses had the option to attend if they pay for themselves! Space could be an issue, but I can say with confidence that I’m the only psycho who would take advantage of that offer (well, maybe that one girlfriend who also knows everyone would pay her own way, too).

At least they can’t stop me from attending the non-company-sponsored after-party!