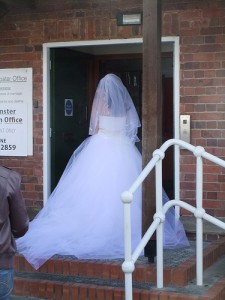 I’m in the middle of re-reading an engrossing Jodi Picoult book, Nineteen Minutes. It’s about a school shooting. So on Friday, when the tragic news broke about the elementary school in Newtown, CT, I thought the novel had made me imagine that headline. Sadly, it hadn’t. And I’ve spent the past few days learning about the victims, most of whom were too-adorable-for-words six- and seven-year-olds, others brave teachers about my age. And just minutes ago, I found out one of those unlucky women was just days away of getting the best surprise of her life.

While the thought of little children with so much possibility ahead of them being systematically slaughtered makes my throat tight and my eyes well up, this new information about 29-year-old Rachel D’Avino is hitting an entirely different nerve. The AP revealed that the behavioral therapist’s boyfriend had recently asked Rachel’s parents for permission to marry their daughter…and he was planning to pop the question this Christmas Eve. As in next week.

I hate that all those lives were cut short. I hate that we’ll never know what those kids could’ve achieved. I hate that so many families are left confused and grieving. But gosh, I am livid that Rachel was so, so close to getting engaged, and she’ll never know. She was also within days of getting her PhD, an incredible achievement for which she obviously worked long and tirelessly.

If she was anything like me, she daydreamed about getting teary-eyed when her boyfriend got down on one knee and being escorted down the aisle in a gorgeous wedding dress. She imagined a happy future with a one-day husband, kissing him goodnight and smiling eight-ish hours later when she woke up next to him. She thought about becoming a mom, having her man hold her hand through labor pains, laugh with her through baby spit-up, and exchange proud grins when their firstborn graduated from kindergarten. She didn’t know that the first of those hopes was going to be realized before the year was over, and the rest would follow soon after.

But I’m hoping her boyfriend, 27-year-old Anthony Cerritelli, knew she had these wishes and can find comfort from knowing he would’ve made them come true for her.