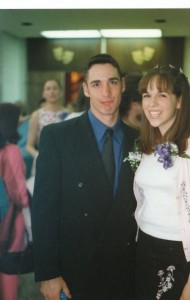 I don’t enjoy being angry. I much prefer to talk about butterflies and sing. Truly. But when you’re with someone for 17 years, you’re bound to get mad about something. I try to limit livid responses to only Paul’s most abhorrent actions. Still, on occasion, I’ve become furious over admittedly stupid things. Here are the highlights.

Because he got hurt playing sports.
In his more athletic days, Paul was extremely competitive. So much so that he’d sacrifice his own body for a win–or just a good play. And he didn’t seem to care if he wound up getting injured ahead of major events. Case in point: the time he took a baseball to the mouth and had an enormously fat lip for our National Honor Society induction. (He’s poorly hiding it in the photo above.) He also reopened the same cut on his leg several times during one softball season, routinely leaving our sheets a bloody mess. (Sorry; I know that was gross.) My biggest problem: He seems to deem games more important than his safety!

Because of something he did in a dream.
While I avoid going to bed angry, I’ve woken up in that state because of the vivid, bizarre dreams I’ve had about Paul. Among his trespasses: He’s cheated on me, taken all the money out of our bank accounts and, perhaps most anger-inducing of all, given me and my family up to the Nazis (have fun with that one, Freud!). When I awaken, usually because of Paul’s snoring, I’m groggy enough to partially believe that the events my imagination concocted were real. I’ll rouse Paul and ask questions like, “Was Rachael Ray good in bed? and “Why did you want Hitler to come find us?” He, of course, has no idea what I’m talking about and promptly falls back asleep. I’ll grow angrier because he can’t explain himself.

Because of something a fictional character did.
And you thought it couldn’t get more ridiculous than the dream thing. I’ve held it against Paul when the romantic lead in a chick lit book I’m reading does something heartless. “That’s so something you’d think is OK to do!” I’d rationalize. But I was also annoyed with him when–Sex and the City, the Movie spoiler alert!–Big didn’t show up on his and Carrie’s wedding day, even though Paul would never ever pull something like that. It didn’t help that we were getting married the day after I saw that flick.

Because of something he did as a teenager–and even a preteen.
There are a few things from our past that, when I’m reminded of them, make me just as irritated now as I was then. Namely, that he teased me in middle school, (despite knowing I liked him!) and that he went to Hooters with some guy friends when we were 15. In my defense, I was less mad that he went to Hooters, even though they surely went there for the scantily clad waitresses and not the wings–hey, they were 15–than that he lied about it, saying that he bowled for four hours. I just hated that feeling of finding out where he really was from someone else.

Crazy as these reasons may be, I don’t stay mad about them (well, maybe the Hooters thing). And I thank my lucky stars that Paul’s worst offenses are predominantly in the past–or a dream.

Have you ever gotten mad at your partner over a not-so-reasonable cause? Do the same little things piss you off again and again?

More About Marriage
7 Reasons I’m Thankful to Be Married
Surviving Working from Home Together
Marriage First: Not Sitting Together on a Flight