This past Friday, Paul went to his friend’s birthday party. I wasn’t feeling great (I’ll blame the free buffet at the Chinese New Year celebration in our apartment complex), so I stayed in. A pal of the birthday boy went around taking pictures of the revelers, including this unfortunate one of my husband. 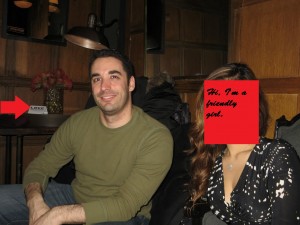 The day after the party, Paul told me one of the women he chatted with added him as a friend on Facebook, a heads-up I appreciated. Soon after that FYI, the party’s shutterbug posted this photo here on Facebook and tagged Paul, as well as Paul’s new Facebook friend, the gal next to him.

Unbeknownst to the photos’ subjects, and likely the photographer, a vase of flowers beside a sign with the word “LOVE” are in the background. A couple of guys with whom Paul isn’t that close liked the photo on Facebook. I’m probably the only psycho who noticed the couple-y props in the photo (and just in case you’d overlook these, I noted them with an enormous red arrow), but I had to wonder if those objects prompted those acquaintances to think Paul was now WITH this girl. A second glance of Paul’s page, with his profile picture including me and marital status of being married to me, would set them straight, so Paul and I got a good laugh about this.

But married folks, take a look at your surroundings before you smile for a photo with a member of the opposite sex. That picture WILL end up on Facebook, and you wouldn’t want anyone getting the wrong idea!

Have you or your partner ever appeared in a picture that sent the wrong message to people who don’t know you well? Would you be bothered if a pic like this popped up of your sig. other and a single person?