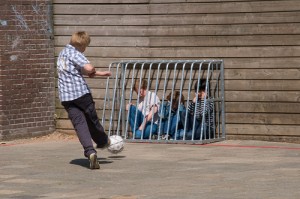 Everyone who knew me at Paulo Intermediate School knew at least two things about me: that I had big teeth (still do) and that I had a big crush on my classmate, Paul. Telling everyone I encountered about the object of my affection embarrassed Paul; he’d gone through physical puberty before his brain had a chance to catch up. In retaliation for the humiliation, and probably in an effort to inspire me to move on to the next poor, unsuspecting sixth-grader, Paul teased me mercilessly.

Still, Paul kept at it. In seventh grade, we shared an English teacher, though he had her in the morning and I had her in the afternoon. At lunch, Paul shared a new vocabulary word with me.

When I got to English and my favorite teacher told us how combining that prefix with that suffix basically added up to “big teeth,” I burst into tears in front of all the other (confused) students.

Later that year, Paul and his buddy, my fellow band-class drummers, covered my hair in spitballs, and I sobbed as I plucked out each damp piece. I was ready to throw in the towel with pursuing Paul in eighth grade when he locked me in the band-room closet, my wails echoing in the horns on the shelves.

Despite the bullying, I couldn’t turn off my crush on Paul. And somehow, he and I graduated to talking on the phone every night and eventually, dating.

The next time I was locked in the band-room closet, it was by choice with Paul. We don’t make a habit of groping each other on school property these days.

So how did I forgive my biggest tormentor in such a short time? Early in our relationship, I told him just how horrific it was to realize in the middle of English class that I had been badly insulted hours earlier. How disgusting the slobbery spitballs felt in between my trembling fingers. How scared I was that I would be stuck in the instrument closet overnight. And for the first time, Paul understood the impact of his cruelty. Now he was the one crying–or the 13-year-old boy equivalent of feeling remorse in every bone of his body.

Seventeen years later, I’m still sensitive about my oversize chompers, but if their once most vocal critic can love them and the rest of me, then I can get past them. And if a nasty childhood bully can turn into my kind, caring husband who wouldn’t dare make anyone feel bad about herself now, then maybe there’s hope for the cruel kids on today’s schoolyards.