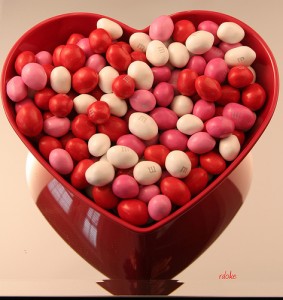 After a Valentine’s dinner at a Chili’s when we were freshmen in college, Paul and I decided to step things up for our sophomore-year Valentine’s date. We found a more upscale restaurant in Boston that we could still afford and Paul even agreed to see the romantic comedy of my choosing at a nearby theater. But fate had other plans.

We met at the restaurant, or rather, where the Internet said the restaurant was supposed to be. A few laps around the vacant lot later, we gave up on finding it. (Smartphones with GPS didn’t exist in 2002.) Then, we started on our fruitless mission to find an appropriate eatery that could accommodate a couple on Valentine’s Day.

I don’t recommend wandering aimlessly on a February evening in Boston. It’s still the most bone-chilling cold I’ve ever experienced, second only to waiting for the boat from downtown Manhattan to Ellis Island on a January morning.

We finally wound up at a T.G.I. Friday’s, you know, such an improvement over our Chili’s Valentine’s Day. The wait and the distance we had walked away from the movie theater meant we’d miss our film, but we were so hungry at this point, we didn’t care. Once we were seated, it was at a table so wobbly, we had to hold it up ourselves. There was a perfectly stable table, also for two, across the way, so we relocated. Our waitress chastised us for moving, despite our pleas to sit at a table we didn’t have to support ourselves, and forced us to return to our original wobbly table. And then an older couple was escorted to the normal table. Throughout dinner, the server gave us attitude, even messing up our order (perhaps intentionally). So we felt $1.25 was a fitting tip. After we paid, the waitress chased us out of the restaurant, shouting, “I don’t need your $1.25!” and threw our money at us as horrified customers watched.

Then, we hightailed it back in the direction of the movie theater hoping to make the next showing of the rom-com we had chosen. The film sold out as we waited online, so we picked a different movie: the highly romantic Royal Tenenbaums. I was kind of enjoying the movie, dark as it was, when, with about half an hour left, a woman screamed. Her friend had stopped breathing. A man called 911. Moviegoers turned to the projector room, waving their arms in hopes they’d turn off the film and turn on the lights, but to no avail. The movie kept playing and the woman and a child with her kept wailing. Eventually, EMTs with a stretcher arrived and loaded the unconscious woman–who was completely motionless with bluish skin–onto it. Her friend and the child with them accompanied them out of the theater, sobbing. You didn’t need to be a doctor to know the lady on the stretcher was gone.

And then the lights came on and the movie stopped, with just 20 minutes to go.

Theater personnel turned it on again, but it started playing at a point way before all the real-life drama. So by the time it ended more than an hour later than it was supposed to, Paul and I had a 0% chance of catching the second-to-last train back to my college. We wound up waiting for an hour in the empty, creepy station. To make matters worse, we got into a fight (about what, who knows?) and spent the trip back to my school in silence.

Have you ever had such a crappy Valentine’s Day?