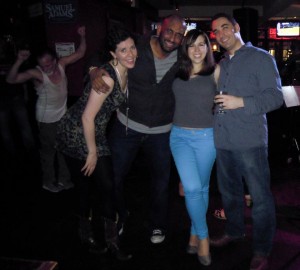 That's Bert dancing on the left. Just kidding; he wasn't invited to this happy hour.

The other day, like many other Thursday nights, Paul and I went to a bar with our friends. It just so happens that all of those friends are Paul’s coworkers. Which led one of his colleagues, with whom we’re not buddies and to whom we weren’t talking, to accuse Paul of the following.

“You’re the only person who brings his wife everywhere.”

My problem with a guy toting his spouse like an accessory aside, this particular dude, whom we’ll call Bert, has been in the same room as me a total of three times. So I don’t consider him close enough to make judgments like that. He also simply couldn’t know that I go to a lot of these happy hours from the three times we’ve attended the same ones. Yet that didn’t stop him from then turning his attention to me and accusing me of “spending too much time with my husband.”

Some background: Paul worked at the same company for nearly seven years after college. His coworkers went out for happy hour just about every week, so over the years I got to know them pretty well from when I’d meet them out. Paul even joined one colleague’s hometown softball leagues and I came to cheer him on at some of the games (just not the ones at 8 AM on Sundays).

At those happy hours, I’m often by Paul’s side, like when we’re sharing food or talking with the group. I’m also sometimes not by his side, like when I’m chatting one-on-one with someone else or with a smaller group. Paul and I invited about 10 people from the happy hour group to our wedding, and I’ve gone out with them a couple times when Paul couldn’t make it. I even went to see the movie Something Borrowed with my closest girlfriend (and fellow chick lit lover) in the gang.

But we still do our own thing fairly frequently. I go out to dinner with my former coworkers and classmates a few times a month. And Paul goes out with his college guy friends nearly every month.

Still, it’s as important to have our own friends as it is to have shared friends with whom we both enjoy hanging out. Going out with our mutual friends is so different from our time alone together, so it never feels like too much time with Paul. Besides, goshdarnit, I love that crazy kid. I attempted to explain this to Bert, and the conversation went like this.

“Are you married?” I asked him.
“No,” he said, almost disgusted by the idea (Bert’s in his mid-30s, I think).
“Have you ever been in a long-term relationship?”
“No.”
“All right, so it doesn’t sound like you’ve been with someone you’d want to spend lots of time with.”
“I wouldn’t want to spend that much time with anyone,” he retorted.

I gave up. Maybe some people really couldn’t enjoy themselves if if the same person was usually around. But if you love someone and are getting plenty of fulfillment from spending time with separate friends, what’s so bad about being part of the same group of pals that goes out weekly?