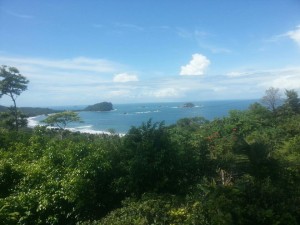 Who couldn't make friends in this serene setting?!

Paul and I were lucky enough to get away for our five-year anniversary a few weeks ago (and by lucky I mean Paul separated his shoulder 96 hours before our trip and we got the Dr.’s OK to still go fewer than 24 hours before), and we wound up staying at a hotel with many other couples around our age. While I didn’t expect our vacation to revolve around making friends, the opportunity to do so became very appealing.

Though we had been in Costa Rica for two nights by the time we checked into our hotel in Manuel Antonio, we were still wearing the clothes we wore on the flight from New York. As if Paul’s injury weren’t enough of a damper, our checked luggage didn’t make it to CR when we did, and we weren’t intelligent enough to pack clothes in our carry-on. So we walked over to a hotel party in the swanky poolside lounge in our schleppy, stinky duds. On the way, we encountered another couple who was as lost as we were. We walked by them without a word, mostly because I was too embarrassed about what I was wearing. When we crossed paths a second time, I got over myself and suggested we find the bar together. A conversation started that continued once we arrived. It turned out the guy, whom we’ll call James, had gone to the same college as Paul, and they knew someone in common. The lawyer-gal, whom we’ll call Karen, and I got along famously. Before meeting, we independently elected to eat dinner as separate twosomes in the lounge, and part of me wanted to ask if they wanted to change their plans so we could keep chatting. I didn’t want to come on too strong, so I held my tongue.

The next day, we were all in the pool at the same time. They weren’t nearly as excited to see us as I was to see them; I don’t know why I was so disappointed. They live in an entirely different part of the country than we do. Paul and I didn’t go on vacation to spend time with anyone but each other. Still, when James struck up a conversation with us at the swim-up bar, I was relieved they didn’t hate us. We got to date #2, I thought. We mentioned we were considering trying this other bar at the hotel, and they seem interested in doing the same later. They had ordered lunch before we were ready to get out of the pool, so our talk ended. And when we went to the bar later, they weren’t there. It was like being stood up for date #3, even though they never promised to go. The bar was filled with other couples who had met the night we met James and Karen, and I was sad we hadn’t chatted these folks up that first night instead.

Our last day there, we ran into James and Karen on a tour, and they couldn’t be bothered with us. I felt like a girl who had been rejected by a guy she’d gone out with a couple times. “What did we do?” I asked Paul. “Why don’t they want to be our friends?” He couldn’t understand why I cared. It was just like knowing a relationship is going nowhere, but it still stings to get dumped.

That night, we headed back to the lounge for drinks and dinner. The cool group of three couples from the other night were talking and laughing. I thought they were all younger than us, so when I heard some of them say they graduated high school when Paul and I did, I chimed in. One of the couples, whom we’ll call Devin and Laura, took to us, and soon, we were gabbing like old friends. We were seated for dinner and our tables were close enough for us to keep talking. I took a leap of faith and asked these two honeymooners if we should pull our tables together, since I regretted not making that move with James and Karen. They were on board. Long after our meals were devoured, we were still chatting. Eventually, a couple from earlier, whom we’ll call Steve and Sara, joined in.

I felt redeemed. I wasn’t a leper. And despite not exchanging contact details with either of these couples, I no longer felt like a single girl who would never find her soulmate.

Do you find that it’s easy or tricky to make couple friends? When you go on vacation, do you want to meet other marrieds?

More About Married Life
Marriage First: You’re the Only Couple Without Kids
5 Reasons to Get Pregnant on Your Honeymoon and 5 Not to
Can You Ever Spend Too Much Time with Your Spouse?