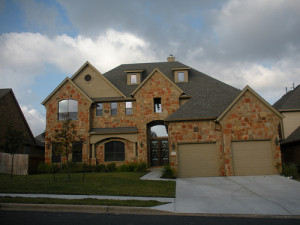 Like our new house? Kidding! Ours is about 1/6 the size of this one in Austin, TX.

In the past two months, Paul and I sold our apartment, bought a house, and moved out of one and into the other. Despite only closing on the sale of our apartment mere days ago, we’ve been living in our house for a month-and-a-half now. Even though our new home is far from a sprawling estate, some key feature additions and expansions have changed a lot of things for us.

1. We don’t fight over the shower or the toilet.
Doubling the number of showers–and tripling the number of toilets–has had the happy consequence of us not stomping our feet, rolling our eyes, or otherwise passive-aggressively and futilely complaining about having to wait to fulfill our basic needs. Sure, the master bathroom is where it’s at, but when Paul doesn’t start his morning routine on time, I can just hop in the other shower instead of cursing him for making me run to the train.

2. I have no idea where Paul is sometimes.
I’ve always gone to bed earlier than my husband, but our bedtime gap is even more pronounced now that pregnancy exhaustion sets in hardcore around 9:30 P.M. Sometimes, I’ll wake up at 2 in the morning, and I won’t hear Paul stirring. Of course, I know Paul well enough to know that he’s downstairs playing video games with his headphones on and not at a pub around the corner picking up women; I just don’t have the benefit of seeing the living room light on or hearing the furious, yet reassuring, controller-button pressing I did in our apartment.

3. We can make dinner together without risking injury.
While Paul and I will always prefer someone bringing food to our door over preparing meals ourselves, our narrow galley kitchen made it nearly impossible for two people to cook efficiently as a team. Now, we not only can have the oven door and dishwasher doors open at once but we also can split up meal-prep tasks without bumping butts.

4. We can sleep without rolling into each other…
Thank you, bedroom big enough for a king-size bed.

5. …but we have to make more of an effort to stay close.
In a smaller bed, spooning is the only option. It seems we took that forced closeness for granted as we now have to reach out across the mattress to check that the other person is still there. I’ll never miss sharing the college dorm XL twin, but the options in between that and king are more conducive to snuggling. Somehow, we’ll manage.

6. Paul has to be my knight in shining armor against house noises.
It had been so long since I lived in a multistory home that I forgot how many sounds houses make, from stairs that creak on their own throughout the night to rain hitting the roof. Embarrassingly, on more than one occasion, I’ve requested that Paul leave the comfort of our bedroom to inspect the home for intruders when one of these noises wakes me up. (In my defense, I’d check myself if it weren’t so hard to get in and out of bed in my high-girth state.)

Have you upgraded your shared living space? What changes did it have on your relationship?

More About Married Life
Marriage First: You’re the Only Couple Without Kids
How Meeting Other Couples Is Like Meeting Other Singles
Can You Ever Spend Too Much Time with Your Spouse?