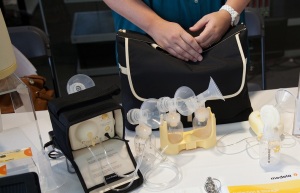 I thought I had been mercifully spared. My pregnancy and my son Jeremy’s first three-and-a-half months of life corresponded with the longest stretch of time I had gone without attending a single wedding since I turned 25. The thought of squishing my bump into a reception-worthy dress and bopping around the dance floor like an awkward manatee was almost as nauseating as the morning sickness. So when the first invite arrived for an event that would take place in my postpartum life, I was thankful for my extended reprieve and excited to get back into the swing of wedding-hopping. But I neglected one key detail.

Let’s pretend I was emotionally ready to be away from my infant overnight (I wasn’t). The real issue was that I was nursing. And when a mom is away from her breastfed baby, she has to express breast milk somehow, lest her boobs fill up until they harden into marble-like orbs and feel as though they’ll rocket-propel off the body to which they were once attached. No big deal, I thought. I had already gotten used to pumping three times each work day. So what if I have to lug a little more to a celebration than my purse and an envelope with a check?

RELATED: 7 Things I Wish I Had Known Before Our First Date Night as Parents

I was lucky to have my first post-baby wedding take place in a hotel where Paul and I had a room. In between courses, I stole away upstairs to make food for Jeremy–and relieve the build-up of milk that had accumulated. About 35 minutes later, I was back in my seat at a table with two other new moms who had lived/were living my plight. Even waking in the middle of the night to pump didn’t seem so bad considering this first child-free night meant I got almost four hours of uninterrupted sleep, something few moms of three-month-olds get to experience. But I foolishly thought the ride from Boston to Long Island during Labor Day Weekend wouldn’t go over my four-hour limit. When I learned the hard way that Google Maps doesn’t have a “places to pump” overlay, we stopped at a Babies R Us in Connecticut so I could buy a car adapter and pump in our SUV.

I was better equipped for the next wedding the following weekend. Still, it didn’t make skedaddling and inadvertently missing my friends’ tear-filled toast any easier.

RELATED: 9 Things No One Could’ve Prepared Me for When I Was Trying to Get Pregnant

But the time pumping proved it was the master, and I was the slave, came at my friend’s bachelorette party last weekend. An all-day affair, I was prepared to pump three times throughout the event. Though it was no fun perching on a triangular piece of wood that jutted out inside the tiny dressing room at the spa, I considered myself lucky that I didn’t have to pump in a car lacking tinted windows like I had weeks before. For the third and final pump of the day, I would be giving it a go in a bathroom in one of the fellow reveler’s hotel rooms…while the rest of the gang attended a sex toy party. As a sales consultant in an adjoining room hawked lotions that make one’s nipples tingle, I sat on a toilet, connected to a device designed to do the same for a far less sexy reason.

I have two more weddings in the next three months, and by the time the spring flood of nuptials rolls around, breastfeeding will likely be a thing of the past for me. Sure, I’ll be sad to leave behind what’s been a pretty awesome bonding experience with my baby, but I’ll be glad to be out of the pump’s bondage.