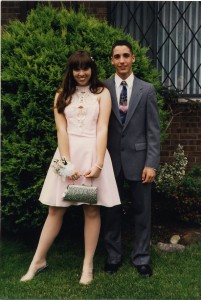 Paul and I recently celebrated our 16th dating anniversary last week. Yes, 16th. And when I tell people we’ve been together since we’re 13 years old (awkward evidence on the left), reactions range from “Aw, that’s so sweet!” to the mildly and wildly offensive replies after the jump.

Disclaimer: I won’t hold it against you (for long, anyway) if you say (or have said) any of these things to me. Truth is, everyone does. But for your more sensitive paired-off friends who’ve been monogamous since they were teens, I’d avoid saying the following.

“So is he the only guy you’ve ever slept with?”
I’m always tempted to respond, “No, I was having lots of sex as a 12-year-old.” It wouldn’t be that crazy for someone who grew up in Staten Island, but it would be that crazy for two honors students who met in band class. (Though, yes, wacky things happen between teenagers in band camp.)

“Have you ever broken up?”
While it’s a reasonable question, had we gone on hiatus (for the record, we dated straight through those 16 years), perhaps I wouldn’t want to talk about the time I spent apart from my now-husband.

“Didn’t you ever want to date anyone else?”
Obviously not enough to warrant breaking up with Paul!

“I could never do that.”
This remark wouldn’t be so bad if it weren’t usually accompanied with a shake of the head or a roll of the eyes, so it seems to imply that I’m missing some gene that, on normal people, encourages healthy exploration of more than just one sexual partner. I always say, “It’s not for everybody” because it’s not easy to be a hormonal high schooler in a committed relationship. It’s even more challenging in college when you can oust your roommate by putting a sock (or scrunchie) on the dorm-room door handle for private time while your boyfriend is far away on his own campus. But somehow, we managed. There are lots of things I could never do, like run a marathon or give birth to a baby without pain meds, but I tend not to speak condescendingly to the strong people who do these things.

“So you went to the same college?”
This irks me because you don’t have to attend the same university to stay together. In a few cases, the asker seems to think one of us gave up on our dreams of going to an awesome school so our fragile relationship could survive. Reality check: I chose where I’d be going to school first: Brandeis University outside of Boston because I was wait-listed at my top-choice school, Cornell. Paul was going to go to Lehigh University in Bethlehem, PA…until they inexplicably relinquished his grant money to the point that he was receiving more financial aid from Boston College, which, as you may have guessed, is in the Boston area. We got lucky that we went to schools in the same metro area, but we would’ve tried to make our relationship work even if we were farther apart. And it still was quite the effort to go from seeing each other every day to once a week tops.

“Do you wish you dated more people?”
My mom actually gets asked if she wishes I dated more people, and I love her response to this: “So she could have her heart broken more times? No thanks.” Maybe her answer would be different if she didn’t think Paul and I were great together.

Okay, admit it: Have you ever said any of the above to someone who’s been with her spouse since high school or earlier? Are any of the above not so offensive? What other questions/remarks would you add to this list?