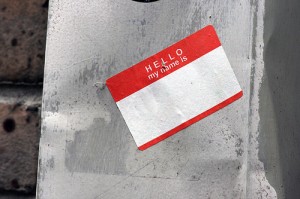 Unlike most married ladies, especially the ones where I come from (Staten Island, NY), I didn’t change my last name when I married Paul. And just as being childhood sweethearts and an interfaith couple has caused confusion among traditionalists–and even forward-thinking folks who don’t realize their comments and questions can offend–so has this. Learn from those people’s mistakes and never utter these to women still proudly sporting their maiden names.

But then you won’t be connected to your children.
Anything that lives inside me for nine months, whether or not we share a last name, is pretty damn connected to me for life. This also presumes that my children will have only Paul’s last name, which might not even be the case.

Then you won’t be a united family.
Paul and I have this crazy plan to live in the same home as each other and our kids. We’ll eat dinner together, go on vacation together, and help each other when we need it. I have plenty of friends who share a name with their fathers–men they resent for leaving their families. I have a feeling we’ll be more united than they are.

That’ll be confusing for your kids.
Mommies and daddies have lots of differences. Paul grows hair on his face; I do not (usually). I have boobs (sort of); Paul does not (not yet at least). Paul’s name is Paul, and my name is Meredith. So I think our children will be able to process that Paul’s and my last names differ too.

Oh, you’re such a career woman.
Sad, but true, this was also said to me. I’m as much a career woman as Paul is a career man, except nobody would ever call him a career man for having a job he enjoys. And while my byline, the name that’s associated with every article I’ve ever written for magazines and websites, is partly why I kept the name Meredith Bodgas, it’s not even a big part. The fact is at last count, there were fewer than a dozen people with the last name Bodgas on this planet (maybe there are more on Mars). And because so many of the people with that last name were slaughtered in the Holocaust, I’m hoping to help this name survive as long as I can, which is ironic because I have a notebook from 7th grade filled with scrawls of my first name with Paul’s last name. Then again, that was before I became “a career woman.”

What’s the most obnoxious remark you’ve heard someone make about a married woman who didn’t change her last name? Do you think a lady’s a little weird if she isn’t dying to assume half of her husband’s identity?