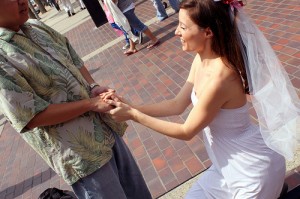 No, I don't know why she's wearing a wedding dress. You try finding a photo of a woman proposing to a man.

A friend (and I hope I’m not overstepping bounds by calling you a friend!) suggested I write about gender roles as they pertain to proposals, and since I aim to please, here goes.

As you know, I’m far from a traditionalist. I didn’t take my husband’s last name, nor do we share a faith. So when it came to getting engaged, did I want Paul to get down on one knee, ask me to marry him, and give me a diamond engagement ring?

You bet your nose I did.

Do I think all women should want that same thing? Hell to the no.

You see, as gaga as I am for Paul and as often as we say I love you, he’s not a hopeless romantic who’s fond of stringing together multiple sentences to explain why he loves me. His well-thought-out proposal speech, including a quote from one of my favorite movies, The Wedding Singer, which he recited on bended knee in a Parisian park, was a rare treat that only getting engaged would prompt. (As for the ring, I think diamonds are pretty, but if I didn’t, I may not have wanted any jewelry.)

If your guy routinely spills his soul to you (lucky!), the above scenario may not be all that special. Moreover, I would’ve asked Paul to get married when we were 20-year-old juniors in college. While he was quite committed to me after seven years together, he wasn’t prepared to take the plunge. Therefore, it made more sense for him to propose marriage to me when he was good and ready (three excruciatingly long years later).

I think whoever in the relationship is ready second should do the proposing–no matter their gender. If the one who’s gung-ho about it first asks, he or she may not like the answer. But if you’re ready around the same time, then hey, draw straws or something.

On to engagement rings: I think if women are wearing them, then so should men. After all, both sexes wear wedding bands. It seems odd that you can’t easily tell when a guy’s engaged, but people across crowded bars can tell when a ring-sporting woman’s spoken for. I would’ve loved for Paul to wear a mengagement ring (yes, that’s a thing). He wasn’t into it, and since he would be the one wearing it every day, it wouldn’t be fair to pressure him into doing so. (Don’t worry–I didn’t need any coaxing to wear my ring.) Still, the fact that one of Paul’s coworkers sooner believed I introduced myself as Beyonce rather than Paul’s fiance (she didn’t think he was engaged!) annoyed me. Too bad Paul couldn’t safely wear the flat-screen TV I bought him as an engagement present.

As with every engagement/wedding/family/life decision, the best course of action is to do what’s best for the two of you!

Who do you think should do the proposing–men, women, or either? Would you want your guy to wear a mengagement ring?

More About Getting Engaged
The One Thing You Shouldn’t Do Right After You Get Engaged
Why Get Married?
Two Crazy Ways Guys Broke Their Engagements