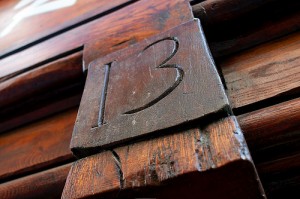 Let’s discuss triskaidekaphobia, aka fear of the number 13. It’s as real as claustrophobia (fear of closed-in spaces, which I have) and hemaphobia (fear of blood, which I also have). In fact, it’s so real that I’ve yet to encounter an elevator in Manhattan with a button for floor 13. So how is 2013’s impending arrival affecting young women toying with the idea of getting married or pregnant?

From what I can tell, it’s not.

At a dinner the other night, one of the diners, who recently got engaged, mentioned that she’s getting married in 2013. My first (stupid) thought, which I thankfully didn’t say out loud: “13?! That’s bad luck!” I quickly realized what a hypocrite I was, as it’s looking like Paul and I may try for a baby in that fateful year. And there are far more unlucky things that can happen to an expecting mother/unborn baby than to a wedding.

Since that dinner, I’ve heard of other friends who are aiming to get hitched in 2013, though I’m still the only woman I know of who’s hoping to be with child next year. But even if I believed in things like luck over coincidence, it’d be pretty foolish to postpone plans because of a number that may be in this child’s birth date. After all, there are plenty of people born without life-threatening diseases on the 13th of a month. Why should the year in which one is married or born be any unluckier?

Are you getting married in 2013? What do you say to triskaidekaphobics? Anyone think I’m nuts for shooting for an unlucky year to get preggers?

Thanks to Brooke for suggesting I tackle the topic of 2013 weddings!