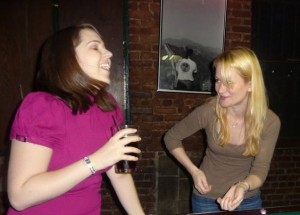 The pretty blonde lady is Liz, whom I ALMOST asked if she was pregnant when she took her Facebook profile down (she was--with twins!).

Conventional wisdom tells us that you shouldn’t ask a gal if she’s expecting. But in certain circumstances, you may think you’re excused from following this rule. You’re not. Here’s why.

She’ll think you think she’s fat.
A very nice woman who reads this blog (hi!) asked me if I was pregnant the other night at our friend’s 30th birthday party. My immediate response: “No, I’m just chubby.” She was quick to say that she didn’t think I was overweight, but my drink of choice at the bar–water–was what made her ask. The truth: I just didn’t feel like drinking that night. It happens. We laughed it off, and I didn’t want her to feel bad, but another gal may have been annoyed because…

She’s pregnant and doesn’t want to tell you.
I just heard about a recent bride who, like me, wasn’t boozing it up at a party. So her friends grilled her about why she wasn’t drinking. They didn’t buy her story so, in tears, she confessed that yes, she is pregnant. She hadn’t hit the critical three-month mark, when your risk of miscarriage goes way down, so she wasn’t ready to share her news with anyone yet. She was bummed that she was forced into spilling the beans.

She’s trying to get pregnant and doesn’t want anyone to know.
My friend also skipped drinking when she and her hubby were trying to have a baby, which prompted nosy folks to get all up in her ovaries. Since she didn’t feel like discussing her bedroom habits with said friends (hey, not everyone’s as open about that stuff!), she was hoping a question like that wouldn’t come up.

She’s trying to get pregnant and isn’t having any success.
You know how frustrating it is when you’re looking for a job and someone asks you, “So, did you get a new job yet?” Imagine that job is instead a pregnancy. My pal assures me this is far more frustrating. Being asked if you’re pregnant in this case is a reminder of your fertility struggles, and that’s no fun.

She’s miscarried.
Speaking of things that aren’t fun, losing a pregnancy has got to be one of the most heart-wrenching experiences a woman can go through. Again, asking a woman if she’s pregnant brings this issue to the top of her mind. Why would you want to do that?

She doesn’t know whether or not she’s pregnant.
Maybe she’s trying to get pregnant and hasn’t taken the test yet. Few people would admit, “I might be pregnant!” just because you asked. So don’t.

What other reasons are there for not asking a woman if she’s expecting? Or do you think it’s within your rights as a concerned individual to ask this?