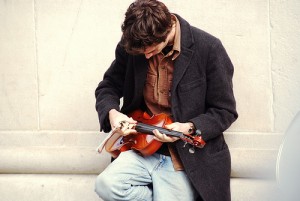 I had the distinct privilege of meeting a fantastic boy recently, and he was up for being filmed, so now you get to see him in action. You’re all going to love him–promise.

Okay, don’t be mad, but I couldn’t resist! That’s my best friend’s newborn baby and, while he’s not looking to settle down yet, I thought you’d get a kick out of seeing him. That’s my baby voice in the background (I’m not actually trying to mimic a baby–I just sound like that without trying).

I feel so lucky to have spent some time with Grady (and his very proud parents who are practically pros already) on one of his first days in existence. And I hope one day, we’ll play that video at his wedding–or at least his rehearsal dinner. 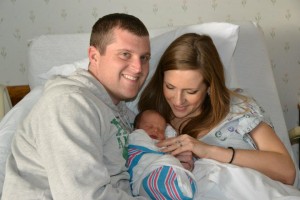 You may remember Emily from her baby shower.

Sorry if you’re a sucker for street violinists–I have no idea who that fine fiddler is in the top photo.

What do you think of Grady? Know of any fresh-out-of-the-womb gals to set him up with?