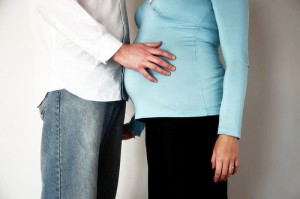 Like a lot of Merital Bliss readers, Josie wants to be a mom someday. Unlike the majority, though, she wishes someday were yesterday. I’d be remiss if I didn’t share her perspective on family-starting. Maybe you’ll relate…

“Coming from a liberal, feminist, and well-educated background, I feel like my peer group judges me for 1) getting married so young (at 24), 2) wanting a baby as much as a career and 3) being ready for a baby so young.

We were 22 when we started dating, and we were talking about kids three months into our relationship. Jimmy’s from Peru, where it’s common to have kids young. In fact, we’re the only couple in his group of friends from home who don’t have children yet. We haven’t yet been scared off by the idea of parenthood, maybe because we don’t have any friends with kids in the U.S., so we haven’t seen firsthand the hardships that come with having a baby.

Despite being ready emotionally, though, we’re by no means ready financially. I’m beginning my career and I have big dreams. Jimmy’s a line cook but wants to be an X-ray technician. That means at least three years of school…and debt. If we had a baby now, we wouldn’t have the stability we want or be able to spend the time that we want to dedicate to our child.

By waiting, we’re giving our child possibilities. I grew up fairly wealthy, and Jimmy had next to nothing growing up (he sold tamales to help pay rent at age 6). I had the possibility of education, whereas Jimmy didn’t. We want to offer our kids the best possibility for education. And we want to spoil them a little.

Plus we want to travel, enjoy each other’s company, and be solid in our relationship. We’re giving our future children more mature parents who aren’t going to resent them.

But I have this primal need. My body wants to be pregnant. This is multiplied by the fact that we’re fairly stable and will have been married for a year this month. So kids seem like the logical next step.

We’ve set 2015 as our goal year to start trying, but it depends on whether Jimmy has his career on track by then. If not, we might start trying anyway. I’ve always heard, ‘The best way to afford a baby is to have a baby.’ We’d just rather not push the limits!”

Josie can’t be alone in wanting a kid, like, now! Raise your hand, er, like this post, if you’d be happy to make a baby today. And if so, why are you waiting?