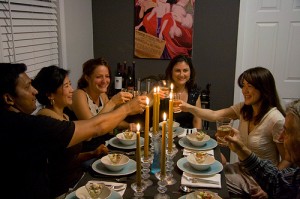 I like any excuse to throw a party. I desperately wanted a half-birthday party when I was six months away from turning 14. Paul and I celebrate our dating anniversary by hosting dozens of guests at our apartment each year. I even started planning a hypothetical five-year wedding anniversary party before we were married a full 365 days. So I would’ve expected myself to be on board with this new kind of party, but I’m so not.

I’m a fan of Babycenter on Facebook (entirely because I worked for their competitor, WhatToExpect.com–and I didn’t know I was still a fan until today), and they shared a thread on their message boards about planning a party I had never heard of before: a TTC party. For the uninitiated, like I was before I started working for parenting magazines, TTC = trying to conceive. And a TTC party seems to be a gathering of friends and family to wish a couple well before they stop using birth control.

Now, it’s entirely possible this was intended as an April Fool’s joke–it was originally posted on March 30th by a Babycenter staffer. But I could see this catching on. Brides who have post-nuptial depression may not be willing to wait eight-ish months for their next big party, aka a baby shower. And maybe the decision to make babies is something worth celebrating. Some middle-aged parents would be overjoyed to hear this news!

Just don’t expect an invite from me for a TTC party. Though I’ll probably tell my best friends when we’re trying because I can keep everyone’s secrets but my own, I like the idea of having something that only Paul and me know. Maybe he and I will go out for a nice dinner (with some delicious chocolate dessert, of course) the night we start trying.

But if I invited my dad over to a TTC party, his reply would 100% be, “I don’t want to know these things.” I suspect most guests would concur.

Do you think this TTC party thing is real? Would you throw one for yourself? Would you attend a friend’s?

More About Having Babies
6 Reasons You Should Never Ever Ask a Woman If She’s Pregnant
The Best Before-a-Baby Advice I Never Got
Maybe to Baby: Lauren Realized She Was Less Not Ready for a Family