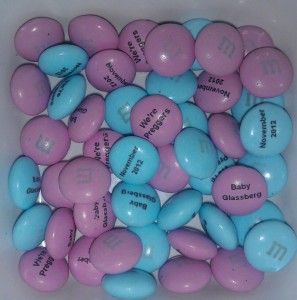 Last week, one of my pals suggested that a few of us get together for lunch. We all managed to be free at the same time (no small feat for us), and we were treated to an amazing announcement in our company cafeteria.

Brooke, who’s been married to her wonderful husband Brian for seven years, told us she’s pregnant–and three months along. I shrieked like a tween who’s positive Justin Bieber winked at HER from the concert stage. This caused a very high-up higher-up to whip her head around to see what the commotion was all about. It was especially fitting that she was there to witness this because, when these friends and I were in an internship program way back in the early aughts, this particular bigwig had given the speech at our “graduation” ceremony. Slightly ruffled by the outburst during her lunch, she said, “I hope it was good news.” I assured her it was the very best kind.

Then, Brooke told us how she let her family know that they were about to become grandparents and an aunt. I knew Brooke wouldn’t do something expected like slipping a sonogram into a Happy Mother’s Day card. Instead, she and Brian ordered custom M&Ms (above) and let the treats do the talking. Brooke said her younger sister was the first to notice the messages, asking something to the effect of, “Is this for real?” Brooke’s mom quickly caught on, and joy ensued.

Having discussed the prospect of pregnancy many times with Brooke, it was so great to hear that she had taken the leap. Funnily enough, she was expecting at her 30th birthday party when one of her guests asked ME if I was pregnant (because she noticed I was drinking water). I offered to buy Brooke a drink that night, and she turned me down. I didn’t press too hard–just in case. And even though the thought crossed my mind in that moment, a couple months later I was still shocked when she made her big reveal.

I had lunch with my mom yesterday, and she, too, was so happy for Brooke. (She and Brooke bonded when Brooke slept over my parents’ house for my 22nd birthday party, and my mom drove her to a Staten Island bus station the next morning so Brooke could get to work in Manhattan on a Sunday.) But this led my mother to say a weird thing to me. “So, that’s everyone, right? All your married friends are pregnant or have babies now except you?”

I told her this wasn’t the case and mentioned one other couple who’s in our childless shoes. She must’ve sensed a defensive tone because she responded with, “I think it’s a good thing that you two are waiting.”

How would you want to share your pregnancy news with your family and friends? Would you do the M&M trick? Feel free to leave your congrats for Brooke and Brian below!